Lady Toppers will depend on guard play this year 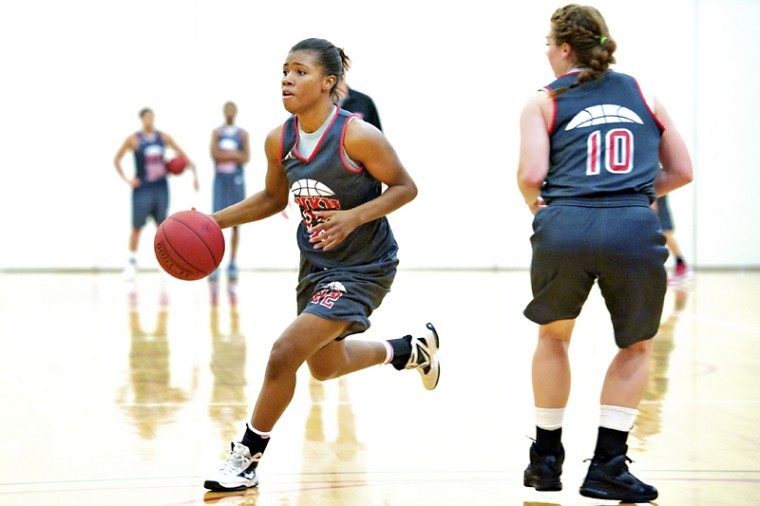 Junior guard Bianca McGee, left, runs past sophomore guard Danay Fothergill to shoot the ball during the first practice of the season Monday, Oct. 1, 2012 at the practice gymnasium inside E.A. Diddle Arena.

When the Lady Topper basketball team takes the court Friday in their first exhibition game of the season, there will be many new looks.

Not only is Michelle Clark-Heard’s new coaching staff young and the players younger and lesser in numbers and experience, but a new style of play will hit the floor.

Forwards Teranie Thomas and Jasmine Johnson also graduated, and several other players left the program or were dismissed during the offseason.

One of those two juniors, guard Chaney Means is the only player who’s been around the program for more than two years.

She inherited one of the bigger leadership roles on the team but said the change from former coach Mary Taylor Cowles to Heard has been a “smooth” transition.

“I felt extremely comfortable with Coach Heard with her open-door policy,” Means said. “Having all these new girls in, I feel like we’re closer than we’ve ever been as a team.

“We’re getting to that point where we have that camaraderie that I think you’ll be able to see on the court.”

Whereas last year’s offense was focused on front-court players like Owens and Mosley, this season’s game plan will be built around WKU’s eight guards.

The team has implemented the 4-out/1-in motion offense this year, a system sophomore Alexis Govan is pleased to play.

“Having a lot of guards is great, but our post players are going to mean a lot to us this year. Without them, we’ll struggle.”

Heard said there will be “ups and downs” as the Lady Toppers continue to learn.

“It is an adjustment for them,” Heard said. “We’re more up and down the floor.

“We run a lot and do a lot of different things, but in order for us to overcome our size differentials compared to some of the other teams, we’re going to have to do those things. They’ve really embraced it, and I’m excited about that.”

Heard said the team’s fifth place preseason placement will serve as momentum for the team, and with a team and style of play unlike any other team in the league, there could be some surprises in the season.

“We understand and know we’re going to have a battle on our hands every day,” Heard said. “But if we continue to prepare, we’ll have the opportunity to surprise some people.”

Heard said freshman Micah Jones has stepped up and could see significant time at point guard.

“She actually has stepped up and done a lot of great things,” Heard said of the Greensburg native. “She’s very hard-nosed tough and knows the game of basketball. She’s very steady and has done an incredible job moving to the point.”

With only nine active players to start the year, the starting line-up could vary from week to week.

Junior guard Bianca McGee is ineligible until December because of transfer issues, and freshman guard LeAsia Wright is out with a torn ligament in her thumb.

Heard said the team’s competitiveness is probably the best asset it has to begin the 2012-2013 campaign.

“That’s a great problem to have as a coach, to figure out who’s going to be the starter or who’s going to do this,” Heard said. “I think it’ll all balance itself out because of the way we’re playing.

“My goal is to get the best five on the floor in the beginning to bring that energy and spark, and then go from there with rotating and subbing people in.”