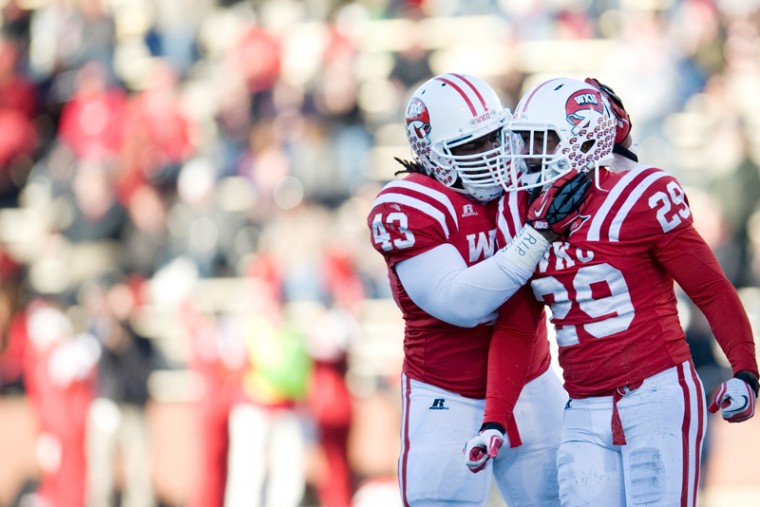 WKU started 5-1 and looked like a bowl shoo-in before tanking down the stretch. Then a win over North Texas Saturday set up a Big Red case of deja vu.

The Toppers (7-5) sit clinging to their bowl lives and probably need some help in college football’s last weekend to make a bowl game.

Where have we heard that one before?

Obviously in 2011 things didn’t work out for WKU. Seventy-two teams were eligible. Two were left out — including 7-5 WKU.

Now, one year later the Toppers are again 7-5. Seventy teams are bowl eligible.

Three teams — Connecticut, Pittsburgh and Georgia Tech — can either clinch bowl berths or be eliminated from the bowl chase Saturday.

If all three lose, WKU is likely guaranteed a postseason bid.

If not, the Toppers will be one of the bubble teams whose bowl hopes hang in the balance.     All sorts of things are working against WKU in the bowl selection process — poor attendance, a 1-3 finish to the season and a resume that includes a win against just one bowl-eligible team, Arkansas State.

But when AD Todd Stewart, coach Willie Taggart and others are stumping for a bowl berth this week, there are still some things they can sell that would be attractive to a bowl selection committee.

Something that sets WKU apart from most of the other bowl eligible teams is the fact it’s never been to an FBS bowl.

Topper fans will be enthusiastic about their team just being picked for a bowl — likely no matter when or where that bowl is.

Look at how WKU fans blew up the Facebook wall and Twitter account of the BBVA Compass Bowl last year, asking for that game — one of the postseason’s least prestigious — to take their team.

Would fans used to postseason berths be banging at the door of the BBVA Compass Bowl? Probably not.

But no matter the locale, the general enthusiasm for a first bowl game should drive ticket sales and make the Toppers worth that bowl’s time.

If a bowl game is looking for a feel-good, rags-to-riches type story, then WKU can make a case as the poster program.

Now, WKU has finished its second straight 7-5 season and is making progress in its pursuit of becoming a legit FBS program.

Getting to a bowl game and then winning one would be a landmark step on the program’s journey to major college football relevancy.

ESPN, which not only broadcasts but runs a lot of these games, is looking for players or story lines that make people tune in to a game that most of the nation cares little about.

WKU has that player in Antonio Andrews and that storyline in his pursuit of Barry Sanders’ single-season all-purpose yards record.

The junior running back has totaled 2,977 all-purpose yards this season — 273 yards short of the record Sanders set at Oklahoma State in 1988.

Should the Toppers get to a bowl, Andrews will have a good shot of breaking a record set by a college football and NFL Hall of Famer.

That’s the kind of accomplishment some people might tune in to see.