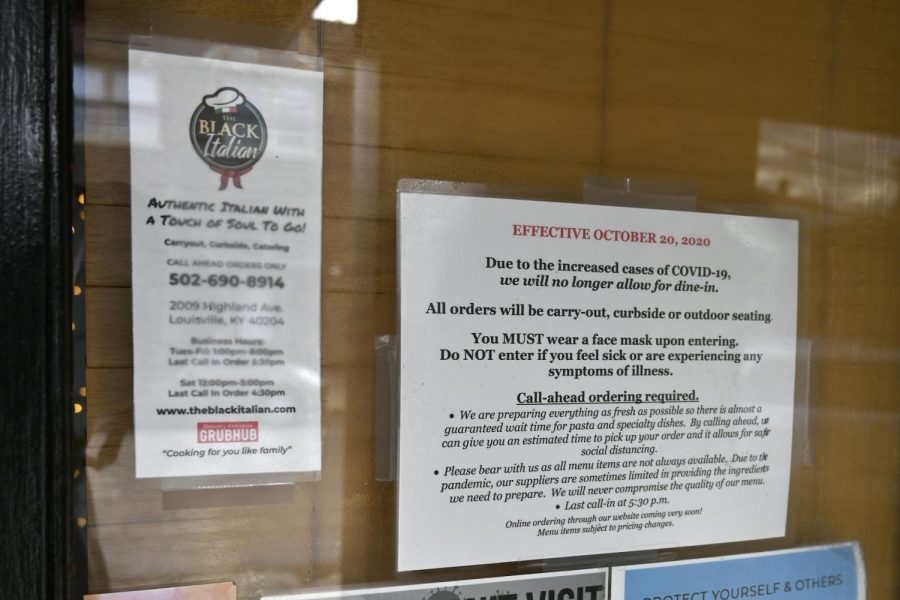 Signs on the door of The Black Italian restaurant and catering service showing the COVID-19 restrictions, in Louisville, Ky., Thursday, Dec. 3, 2020.

(The Center Square) – A group of restaurants in Kentucky received an injunction Friday that prohibits Gov. Andy Beshear from enforcing any new COVID-19 orders against them.

Only Goodwood Brewing Company, which has brewpub locations in Louisville, Frankfort and Lexington, as well as Louisville’s Dundee Tavern and Trindy’s Restaurant in Georgetown are covered by the ruling issued by Scott Circuit Judge Brian K. Privett.

The businesses, represented by the Pacific Legal Foundation, filed the suit last month claiming that laws the General Assembly passed earlier this year put limits on the governor’s powers.

That issue, too, is being fought in the courts. Just this week, Beshear won another legal victory in Franklin Circuit Court when a judge there kept a resolution passed by lawmakers to put time limits on COVID-related orders from taking effect.

However, Oliver Dunford, a lawyer with the foundation, claimed that injunction only pertained to those parties in Franklin County, which is where the state capital Frankfort is located.

Privett, whose jurisdiction includes Georgetown in Scott County, agreed. He said that issuing the order gives Kentucky’s “the business community and general citizenry” a voice.

“While we elect and put trust in our officials in Frankfort, the impact of decisions in the Capitol actually live and breathe with the citizens of the Commonwealth, where the people operate businesses and work and raise families,” Privett said. “Where the courts give the citizens of the Commonwealth the ability to seek redress for harm when a law, executive order, or regulation from Frankfort disrupts their ability to live within their inalienable rights, that redress should be freely given.”

A spokesperson for Beshear told The Center Square an appeal was already filed with the state Court of Appeals.

Staley has said previously that the governor’s actions in establishing the orders weren’t political but instead an effort to defeat COVID-19. In doing that, Beshear has heeded the advice of federal and public health experts.

While Dunford has argued that each of Kentucky’s circuit court districts are co-equal, he’s not sure the Scott County decision will open the floodgates for similar cases to be filed elsewhere across the state. By the time those cases are filed, this one may already be before the state Supreme Court.

“At that point there would be a definitive ruling on the law that applies across the Commonwealth,” Dunford told The Center Square.