PostSecret creator tells all at WKU 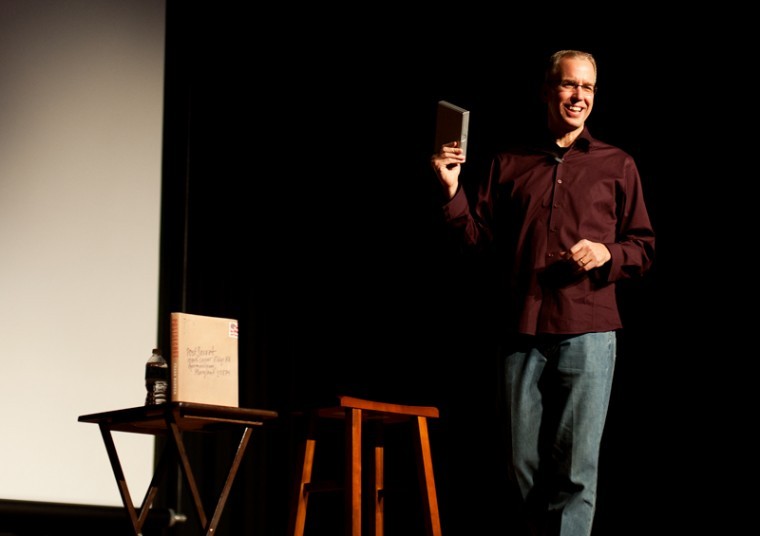 Most people collect their secrets in the recesses of their hearts and minds. But there is one man who physically collects secrets — not his own — those of total strangers.

Frank Warren, creator of the PostSecret project, shared some of his favorite secrets with the WKU community in a packed DUC auditorium at 6:30 p.m. Monday night. His message was simple: “None of us are ever alone with our secrets, even when we feel like it.”

Warren said he’s been told he’s seen more secrets over the eight years he’s done the project than anyone in the world. He said that knowledge led him to a groundbreaking conclusion.

“When we’re keeping a secret, that secret is actually keeping us,” he said.

Warren began by explaining he didn’t really know what drove him to create the PostSecret project. He started by handing out blank postcards to strangers on the street, most of whom completely ignored him. Eventually, he said, postcards began to fill up his mailbox. To date, Warren has over half a million postcards stacked at his house, which are scanned and uploaded to the PostSecret website.

He said after reading a card dealing with someone’s struggle with being physically abused, he realized something.

“There are two kinds of secrets — ones we hide from others and the kinds we keep from ourselves,” he said.

PostSecrets gained popularity when the band All American Rejects used actual postcards in their video “Dirty Little Secrets.” Warren said three of the band members put in their own secrets, including an admission to cheating on an SAT and getting a scholarship for it.

Warren talked about the process of publishing the PostSecret collections, including the challenges he faced editing the book with a lawyer from Harper Collins publishing.

He also explained the reason why the extremely popular PostSecret app was taken down from the App Store.

“It was a design flaw,” he said. “Everyone who used it had perfect anonymity. It was taken down by griefers who wanted it gone. It was dicks that brought down the app. And no, I don’t mean jerks, but literal pictures of dicks. We had to take down the app.”

Finally, he encouraged those in attendance to face their own secrets by standing at one of two microphones in the auditorium and sharing their secrets in the last section of the presentation.

A group of about 20 audience members shared their personal secrets, ranging from undisclosed roommate issues to struggles with suicide and family secrets.

Independence sophomore Elyssa Carmony admitted to attempting suicide three weeks ago. Carmony told the audience this was not her first attempt.

“I was tired of everyone thinking that I was perfect and put together and I felt like I was lying to people when they saw me that way,” Carmony, an Honors College student, said after sharing her secret. “It was liberating for me. I also believe that someday my struggle, my stories and my scars will be something that will be able to help so many other people struggling — and I think tonight was just a way of me showing other people that I’ve been there.”

Christina Hesse-Colon, a alumna from Louisville, has been looking forward to hearing Warren speak since she started reading the postcards.

“I always really enjoyed the message of people trying to share their secrets,” she said. “You can be yourself without having anyone persecute you for it.”

London senior McCall Logan, who reads the website every Sunday for new cards, said the presentation was “really moving.”

“I didn’t expect it to be this personal and connect with this audience as much as I did,” she said.