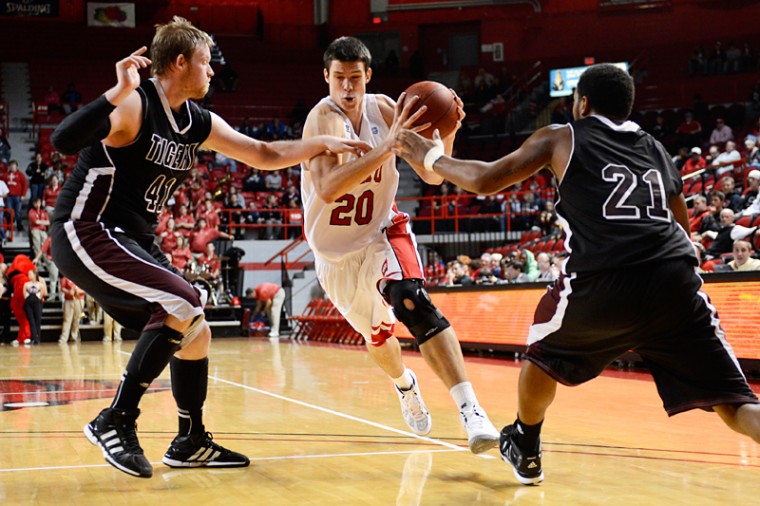 It took coach Ray Harper two months to get the Toppers in postseason form last year.This season, he’ll have a little more time to get them there.

Harper and the Toppers have one more exhibition game, at home against Kentucky Wesleyan at 7 p.m. on Saturday, before WKU’s 2012-2013 regular season begins on Nov. 10.

He took over as interim coach of a 5-11 WKU team on Jan. 6, after then-coach Ken McDonald was released.

On March 6, two months later, the Toppers beat North Texas in the Sun Belt Conference Championship to secure a spot in the NCAA Tournament.

Despite their late success last year, WKU was picked by Sun Belt coaches to finish third in the league this season.

“It doesn’t matter if we were last or second-to-last,” he said. “We’ve just got to come in and play basketball and do what we do at the end of the day.”

Junior guard Caden Dickerson said the experience the Toppers gained in those two months could help the team go far this season.

“We’re experienced, so we’ve been there and we’ve done that,” Dickerson said. “We know what it takes to get back to where we were last year, and we’re just going to take each game one-by-one and take it as an opportunity to get better each night out.”

Experience will be key for WKU — with only two seniors (Crook and center Teeng Akol) on the roster, the Toppers will need some younger players to play beyond their years.

One underclassman expected to play a big role for WKU is sophomore forward George Fant, who had 20 points and eight rebounds in the team’s first exhibition on Monday against Campbellsville.

Fant said he’s seen clear improvement from the Toppers over the offseason in their on-the-court hustle.

“You’ll see a hard-playing team every time we go on the court,” he said. “You’re going to have the fans happy because we’re going to dive on loose balls and play physical and do all the little things.”

Harper brings winning experience to the table as well, even if most of it didn’t come in Division I.

Though this will be his first full season as head coach at WKU, Harper has had plenty of success in previous coaching jobs. He led Kentucky Wesleyan to two Division II championships in his nine seasons as coach and brought two NAIA championships to Oklahoma City University in the following three seasons, compiling a .833 winning percentage in his coaching career.

Harper is at the helm of a team that lost two starters from last season — guard Kahlil McDonald graduated and guard Derrick Gordon transferred to Massachusetts.

He said he has yet to determine what his starting lineup will look like and plans to experiment with different player combinations while he waits for players to earn full-time starting roles.

“I’m constantly telling guys, ‘All I know is what I see,’ and they have the opportunity every single day in practice to change jerseys to become a starter,” Harper said.

“I think that’s healthy for a basketball team, so guys don’t get comfortable and other guys know there’s always an opportunity.”