I is for Inked: Students use tattoos for expression 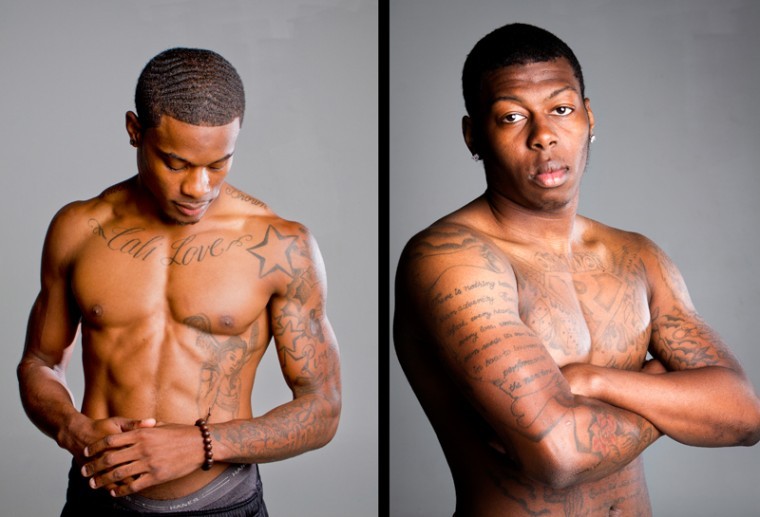 “You don’t want to know the time it took to get these,” said Elvyonn Bailey, left, a junior from Riverside, Calif. Bailey is on the WKU cross country team and has had tattoos for several years. “I am not going to get any on my hands or neck, no sir,” said Frankfort senior Rico Obannon (right). Obannon got his first tattoo on his 18th birthday and has continued ever since.

From delicate flowers to graphic skulls, WKU students use tattoos to express themselves in a variety of ways.

For Owensboro sophomore Corey Jackson, tattoos are a way to honor his parents.

Jackson said it’s important for his tattoos to mean something. When he wanted a tattoo for his mom, he got her birthdate to help him remember it.

“You start thinking about it more and more, and you want more of them,” he said about wanting additional tattoos after getting his first.

Six tattoos and nearly $600 later, Jackson said he wants more. But it’s not an easy process.

“It’s like a sewing machine going in and out of your skin,” he said.

Colvin said after getting out of a bad relationship she changed her focus.

“I had always depended on a guy,” she said. “I had never understood what it meant to have a relationship with Christ.”

After being baptized in December 2011, Colvin said she got Proverbs 31:25 on her ribs as a reminder of her newfound strength.

A second tattoo — that Colvin designed herself — represents another special relationship. Colvin and her sister’s birth flowers wrap around her foot. She said before she left home to attend college, she wanted her sister to know she would be thinking of her.

“It means no matter how far away I am, we’re always together,” she said.

Banks chose a nautical theme for his full-chest tattoo. A blue anchor is surrounded by two roses and two swallows in the large graphic that took six hours to complete. The anchor symbolizes strength, Banks said.

The swallows are traditionally the last bird a sailor sees when leaving home and the first they see upon returning. He said they help him remember where his home is.

Banks also has a sugar skull tattoo on his arm and a heart on the inside of his lip — yes, inside his mouth.

He said he hopes to get as many tattoos as he can.

Some of Obannon’s tattoos serve as memorials to loved ones he has lost. Praying hands help him remember his father, who died when he was 15.

Other tattoos are dedicated to his late sister and grandparents.

With 23 tattoos, Obannon’s ink says a lot. His other tattoos include birds, roses, religious symbols, clowns and quotes.

Because of the positive nature of his tattoos, Obannon said he hasn’t received negative feedback about how many he has.

While his mom wouldn’t let him get a tattoo before he turned 18, he said she approves of the ones he has.

“They all represent me and my life,” he said. “I’m not an expressive person. But if you look at my skin, it expresses who I am, where I’ve come from and who I am today.”