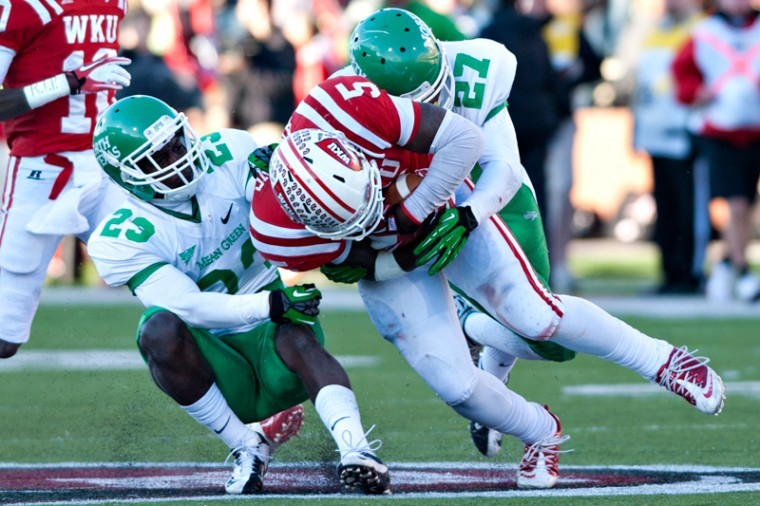 Junior running back Antonio Andrews (center) is brought down by freshman defensive back Zach Witfield (left) and sophomore defensive back Lairamie Lee during the game Saturday, Nov. 24, 2012 at Houchens-Smith Stadium. Western Kentucky won 25-24.

For the third time this year, Antonio Andrews was named the Sun Belt Conference Offensive Player of the Week Monday.

The junior running back carried 25 times for 230 yards with a touchdown and two fumbles Saturday in WKU’s 25-24 win against North Texas.

Should the Toppers (7-5) be picked to a bowl, Andrews would have a chance to break the national record of 3,250 yards, set by Oklahoma State’s Barry Sanders in 1988.

Andrews joins Louisiana-Monroe quarterback Kolton Browning as the only players to be named Sun Belt Offensive Player of the Week three times in 2012.

Andrews was also named to Paul Hornung Award Weekly Honor Roll for the fifth time this season.  It was fourth straight week that Andrews has been honored.

Fan voting for the 2012 Hornung Award is still taking place at www.votepaulhornung.com, and will run through Dec. 2.