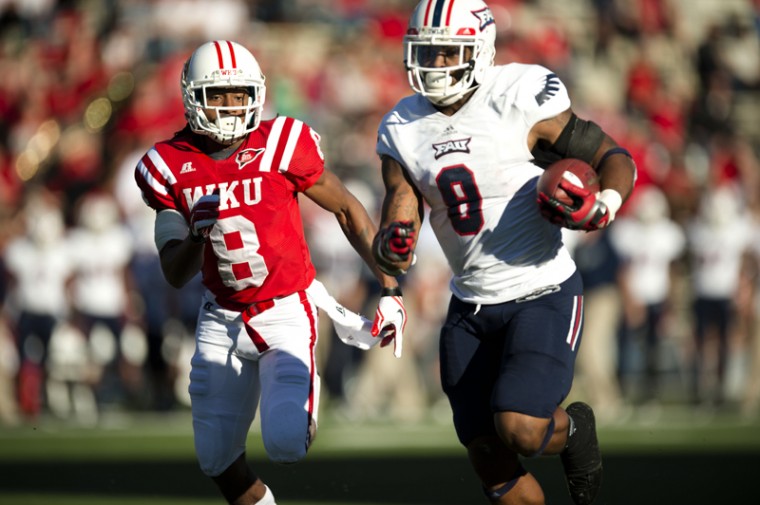 FAU wide receiver Daniel McKinney keeps one step ahead of WKU wide receiver Marcus Vasquez to score a touchdown during the Hilltoppers vs. Florida Atlantic game on Saturday, November 10, 2012. FAU upset WKU in their second to last home game with a final score of 37-28.

The Toppers have compiled a 4-1 record on the road this year, with the only loss coming to then-No. 1 Alabama.

At home, though, WKU is 2-3, with the only wins coming over Austin Peay in the season-opener and Southern Mississippi, which currently sits at 0-10.

Since those two September wins, though, the Toppers have lost close games at Smith Stadium to Louisiana-Monroe, Middle Tennessee and, on Saturday, Florida Atlantic.

Senior safety Kareem Peterson said the record has more to do with how the team has played recently than how they have played at home.

Coach Willie Taggart agreed with Peterson, saying the Toppers would have had more success over the past month at home if they had played with more focus.

“It doesn’t matter whether we’re on the road or not, we’ve just got to go out and be focused on that game and the play that we’re on every single time,” he said. “It’s frustrating that we haven’t done that at home and it’s something we wanted to do.”

The WKU team that took the field against Florida Atlantic on Saturday was the same one that kicked off the season against APSU back in September, but the Toppers didn’t play like the team that dominated that game.

Taggart said his team’s big problem against FAU was their physical effort. He said they were unable to win the physical battle because they weren’t mentally prepared.

“It’s hard to be physical when you’re not locked into your assignment,” he said. “We’ve got to make sure we know exactly what we’re doing, and when we do that it’s easier to go out there and be physical with someone.”

It didn’t work out the way it looked like it would on paper, though. WKU gave up 257 yards though the air and gave the ball up four times to FAU’s one turnover.

Senior right guard Adam Smith said the performance was a complete 180-degree turn from the team that held APSU to 11 passing yards in the season-opener.

“That’s definitely going to be one of our main focus points this week in practice and next week, the last week of the season, to getting back to where we were at the beginning of the year,” Smith said.

Taggart said the Toppers must find the energy they came into the season with in their final two games of the season.

WKU might need to get another win or two under its belt to avoid a repeat of last season’s heartbreak.

The Toppers finished 7-5 last season but were one of two bowl-eligible teams to miss out on a bowl game.

With six wins right now and two games left, Peterson said the Toppers will be able to rest easy if they can increase their record to 8-4.

“We’ve got to knock these ones out in order to get a bowl,” he said. “They definitely are important.”

Smith said the Toppers, whose past three losses have come by a combined total of 15 points, are still trying to prove themselves to potential bowl representatives.

“I just think we let the little things slip out from under us and we just have to get back to doing those things right and playing like we’ve got something to prove,” he said.

– Taggart said senior defensive tackle Rammell Lewis, who left Saturday’s game with a shoulder injury, will be able to start this Saturday against Louisiana-Lafayette.

– Junior linebacker Andrew Jackson currently ranks No. 4 in the nation in solo tackles per game with 6.70.

– Senior defensive end Quanterus Smith, who scored his first touchdown of the season on Saturday on a 75-yard fumble return, still leads the NCAA in sacks per game with 1.39.

– Former WKU running back Bobby Rainey, currently playing for the Baltimore Ravens, was placed on inured reserve on Tuesday with a knee injury, ending his season.