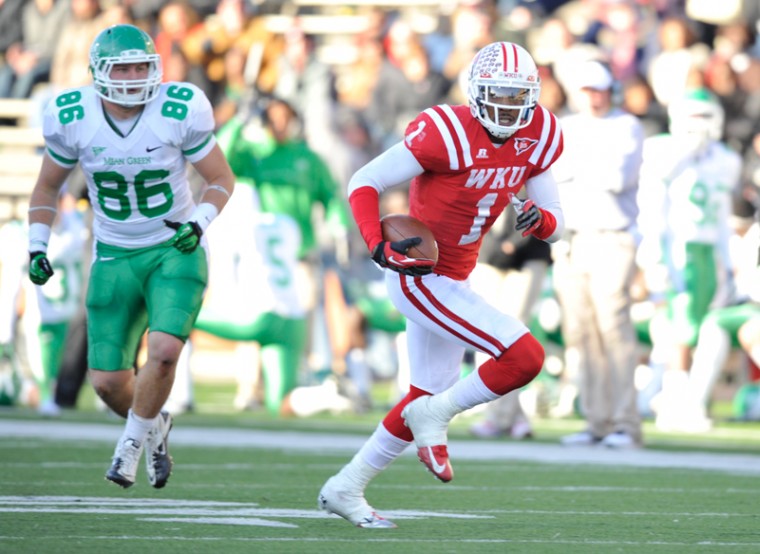 Sophomore defense back Jonathan Dowling intercepts a football and returns the football for a touchdown in the 4th quarter. WKU won 25-24 against North Texas on Saturday Nov. 24, 2012 at Smith Stadium.

The turning point of Saturday’s game between WKU and North Texas came with just under 13 minutes to go in the fourth quarter.

With the Toppers down 24-10 and the Mean Green offense driving in its own territory, the WKU defense knew making a stop would be critical to the comeback effort.

They ended up doing one better. One second-and-nine at the UNT 39-yard line, quarterback Derek Thompson dropped back and threw a short pass to his right. Sophomore safety Jonathan Dowling slipped in front of the receiver, intercepted the ball, and took it 29 yards for a WKU touchdown.

The Toppers botched the extra point, but the score started a 15-point WKU rally that led to the final win of the regular season.

Dowling said the interception was the result of everyone on the defense doing their job.

“It felt like everybody did everything they were supposed to do on that play — if the D-line and Rammell (Lewis) wouldn’t have made the quarterback pull up and throw it I probably wouldn’t have had a chance to get that interception,” he said. “Everybody just needed to be in the right place at the right time.”

Toppers look ahead to bowl future

When the smoke cleared from WKU’s final game of the regular season, some Topper fans might have felt like it was deja vu all over again.

WKU finished the season 7-5, just like last year. The Toppers were the only team with a winning record to get excluded from postseason play last season.

“I said earlier in the year that 7-5 wasn’t good enough — 7-5 is going to have to be good enough this year,” coach Willie Taggart said in the week leading up to the game against North Texas.

Though the regular season is over, WKU’s bowl hopes are currently in limbo. So far, 72 teams in the NCAA have reached the bowl-eligibility mark of six wins and will be competing to earn one of the 70 total bowl bids.

Taggart said seven wins should be enough for the Toppers to earn a spot in postseason play this year.

“We felt like we had enough last year,” he said. “We felt like they didn’t know who WKU was last year but I think people know who we are now and I think we’re going to be OK.”

When junior running back Antonio Andrews was finished on Saturday, he had racked up 230 rushing yards and 323 all-purpose yards — about average for the breakout player on the WKU offense.

With one more game, he would have a chance to break it.

Senior tight end Jack Doyle talked earlier in the week about the strengths Andrews brings to the offense. He said he was happy for the running back after the game.

“He’s the man,” Doyle said. “He makes plays for us and the O-line kept coming together and staying positive. It’s a good feeling.”

With his first-quarter touchdown pass to senior tight end Jack Doyle, Jakes threw the 50th touchdown of his career, tied with Justin Haddix for most in WKU history.

If the Toppers go bowling, he’ll have a shot to break the record.