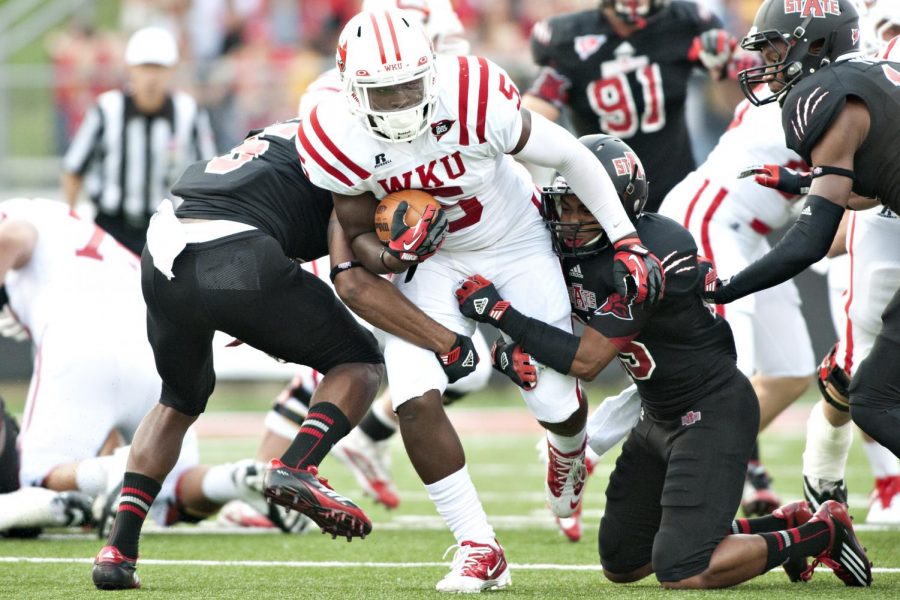 Western Kentucky running back Antonio Andrews (center), is brought down by Arkansas State defensive back Chaz Scales (right) and Don Jones during the game Saturday, Sept. 29, 2012 at Liberty Bank Stadium in Jonesboro, Arkansas. This is the second season in a row that Western Kentucky has begun Sun Belt Conference play agains the Arkansas State Red Wolves. In the last matchup, The Hilltoppers lost 22-26.

Junior running back Antonio Andrews has been the bread and butter of the WKU offense this season.

He had perhaps his biggest game of the season on Saturday when he rushed for a carer-high 215 yards and a touchdown in a 26-13 WKU win over Arkansas State in Jonesboro, Ark.

Andrews wasn’t the starter when the season began, though. That distinction belonged to junior Keshawn Simpson, who rushed for 60 yards on eight carries in the season-opening win over Austin Peay before leaving with a knee injury.

Simpson hasn’t played a down since then, but Taggart said he’s a lot closer to being in playing shape.

His return puts the Toppers in an odd predicament of having possibly too much talent — the impact it will have on Andrews, current centerpiece of the WKU offense, remains to be seen.

Taggart said he would address the issue when Simpson is back in starting shape.

“It’ll be interesting,” the coach said. “We’ll see when (Simpson) gets back out there and see how he goes.

“If he gets to where he’s 100 percent and can go, we’ll put him in there and have some plays for him and he’ll just add to what we intended to do anyways to start the season.”

Taggart said there’s no reason to rush Simpson back since Andrews and freshman running back Leon Allen, who has taken the second-string snaps in the past four games, have been performing so well.

“We’ve got two really good backs right now — one is filthy good right now,” he said. “We’ve got to keep that going.”

Toppers look ahead during week off

The Toppers have something this weekend that they haven’t had in a long time — some time off.

Well, not exactly “off.”

“I wouldn’t say ‘off,’ Taggart said about the week. “Hopefully they don’t take these days off, hopefully they do something football related to keep them going.”

For the first time in six weeks, WKU does not have a football game scheduled for the coming Saturday. The next scheduled game is on Oct. 11, a road game against Troy.

The bye week could be important for some of WKU’s injured players. Senior quarterback Kawaun Jakes is nursing an injured left knee and Simpson is still working to get back on the field.

Other than that, WKU has been pretty lucky avoiding the injury bug this season, Taggart said.

“Knock on wood, but we’ve been fairly healthy,” he said. “It gives our guys a good chance to get their bodies back together and be ready to attack that week with an enthusiasm unknown to mankind.”

Taggart said WKU is already preparing for the Trojans.

“We started yesterday,” he said on Monday. “It’s going to be a big-time game and those guys are playing really well and they’re going to be well-coached.”

The Toppers will travel to Troy, Ala., next Wednesday for their bout with the Trojans on Thursday.

Taggart said he expects a hostile crowd on the road.

“It’s going to be another tough environment playing on the road,” he said. “We’re going to have to play a great ballgame in order to win.”

Dowling to return at Troy

He missed the game on Saturday, but sophomore safety Jonathan Dowling will be patrolling the WKU backfield in their next game against Troy.

The safety, currently tied for the NCAA lead in interceptions per game, was suspended for the ASU game for a late, helmet-to-helmet hit in the Southern Mississippi game.

He is eligible for WKU’s next game, but Taggart said Dowling will have to earn his starting job back from senior Kareem Peterson, who replaced him on Saturday.

“We don’t give anybody anything around here — you’ve got to go and work,” he said. “We’re sure Jonathan’s going to come and compete and work for that job but I wouldn’t go in and say either of those guys are the starter.”

Dowling wasn’t totally absent against ASU. He was on the Toppers’ sideline offering some vocal support for the team.

Taggart said that shows how much he cares about WKU.