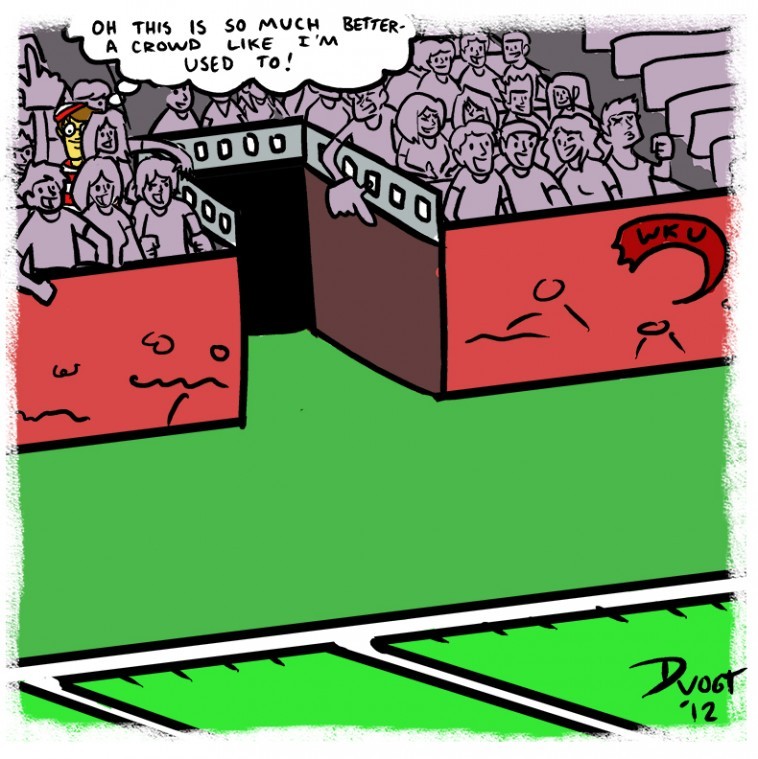 THE ISSUE: After a 16,000-person crowd showing in WKU’s first home game of the season, the past two games have seen the two highest attendance records in stadium history.

OUR STANCE: After initially chastising fans for the extremely low attendance in the first home game, the Herald is here to commend fans for showing up and supporting their Toppers.

While the Homecoming football game ended in a heartbreaking overtime loss for the Tops, there was a highlight: attendance was announced as 22,323 — the second-largest crowd ever, with last month’s victory over Southern Mississippi being the highest.

With attendance mattering in every home game of the season, this spells good news for the Toppers’ bowl hopes even if they possibly don’t win the conference.

Great crowd support also means an entirely new atmosphere at home games and during tailgating. Anyone familiar with attending games at Smith Stadium can see it. The lines are longer, and the seats are now being occupied. Fans are starting to show up early to find a place to sit, and people actually have to stand up to see the game.

The Tops are starting to get national acknowledgement, and WKU is inching closer to the goals it set when it decided to move up from the Football Champion Subdivision to the Football Bowl Subdivision’ recognition and support that could spell big monetary gains for the school in the future.

And finally, the fan culture of WKU football is changing, and we are happy that the attendance is starting to match the level of play the Tops are playing at.

Yet, the fans’ job is not done.

As Coach Taggart said in his post-game press conference after the Homecoming game, there is still more football left to be played. And three more home games  are projected to be sold out.

Even though the Tops are now tied for second place in the conference, they still have a shot at winning the conference crown. And the crowd support in the second half of the season can make all the difference, especially in a no-lead-is-safe conference such as the Sun Belt.

We are pleased that the attendance has literally been through the roof, so let’s keep it up and see how the season ends and where crowd support takes the Tops.

This editorial represents the majority opinion of the Herald’s 13-member editorial board.