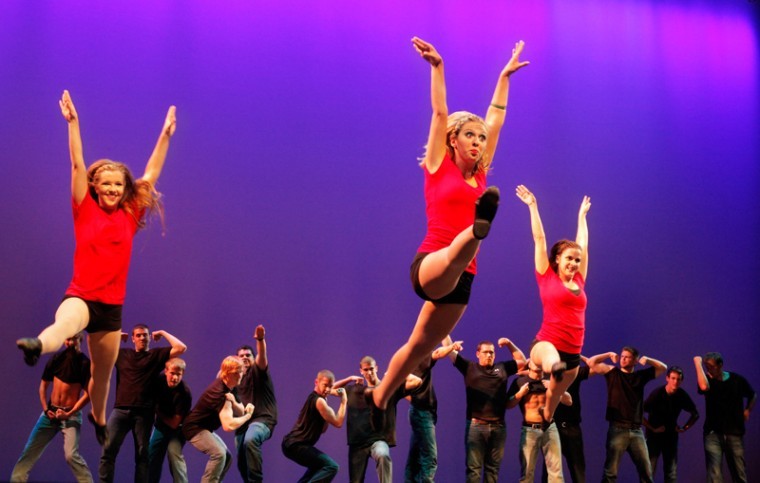 Sororities and fraternities joined together to perform at Kappa Delta’s annual “Shenanigans” philanthropy. This year’s event had a Disney theme and featured characters and music from a variety of popular Disney movies.

It was lights, camera, action, for Kappa Delta sorority tonight, whose annual Shenanigans philanthropy was a little more “animated” than in previous years.

Every Shenanigans has a theme — this year’s was Disney.

Through a drawing, each sorority gets partnered with two fraternities, and then the training begins. Most Panhellenic sorority and fraternities participate, one exception being the host sorority KD.

The competition was held in Van Meter Auditorium to a packed house. People spilled out into the aisles, while chants and cheers rose throughout the theater as each group took the stage.

There was a mix of Disney songs and pop songs as costumed characters such as the Queen of Hearts or Jafar would introduce the next song.

Oldham County freshman Jack Roller, a member and dancer for Sigma Phi Epsilon fraternity, said his dance team which was paired with Alpha Tao Omega Fraternity and Alpha Gamma Delta sorority has been practicing for two hours every Tuesday and Thursday.

“It took a lot of long nights and dedication,” Roller said. “You had to keep an open mind and know how to make fun of yourself.”

Murfreesboro Tenn. sophomore Brad Chambers, a member and dancer for Pi Kappa Alpha fraternity, dressed up as an Indian for a Pocahontas themed dance. Chambers said he enjoyed himself.

“My favorite part was getting to meet all the new people,” Chambers said.

This year is Sig Ep’s second year winning, and Sledge was a part of last year’s team.

“It feels good letting the new guys experience a feeling like this that they worked hard for,” Sledge said. “My favorite part was learning how to step.”

“I liked watching everyone have a good time and making a fool out of themselves.”