F is for Fashion designer: For student, fashion is way of life 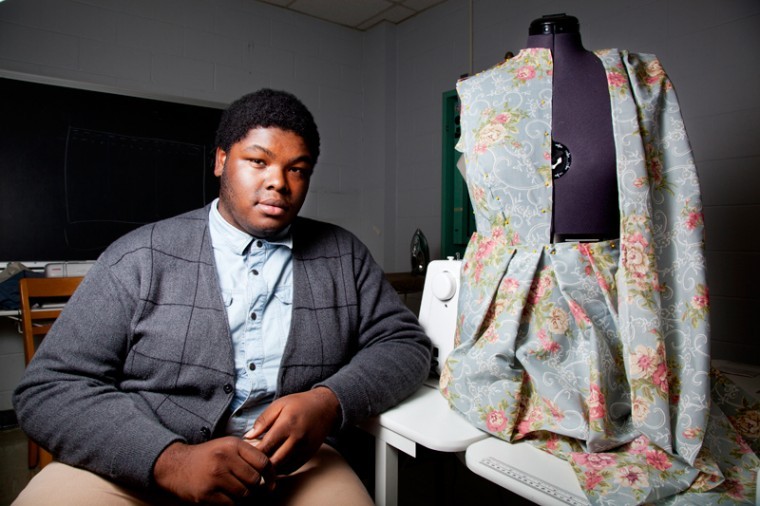 Louisville senior Jordan Pitney, a fashion major, has a dream to own his own clothing line. "I want people to look good because when someone looks good, they feel good too."

The Louisville senior has been experimenting with design since high school when he learned how to crochet and draw sketches of his ideas.

“You can see a person’s whole demeanor change from an outfit,” he said.

Pitney is most interested in high fashion, or couture. He recently returned to campus from attending Mercedes-Benz Fashion Week in New York.

“It was the best experience of my life,” he said.

While in the Big Apple, he not only went sightseeing but also bought materials to make his designs. Pitney went to Mood Designer Fabrics, the store featured on “Project Runway,” where he got denim and leather.

He was also able to network at several events and dropped his portfolio off at different showrooms.

Paducah junior Marquise Scott said Pitney saw great shows while he was in New York and was able to get “freebies” from Marc Jacobs.

The two have been friends since meeting a few years ago and learned they had fashion, music and travel in common.

“He has a mix of styles: urban, chic, with a more relaxed formal look,” Scott said. “He’s very fashionable.”

Pitney said he finds inspiration in other cultures and people around him for his designs. He recently took an interest in Arab culture. He is learning Arabic from international students in exchange for helping them with their English.

When sewing, Pitney enjoys creating custom-made looks for his clients. He tailors everything from blazers to shorts so that they have more than clothes that fit but a fashion style as well, he said.

Atlanta senior Derek Malveaux said Pitney has designed a few pieces for him, including a sleeveless denim jacket with intricate details and patchwork.

However, he won’t show what he’s making until it’s good enough to be shown, Malveaux said.

“He’s very determined,” he said. “He wants to have top grade work.”

To further his expertise, Pitney plans to attend graduate school in Italy. He’s interested in Polimoda International Institute for fashion design and marketing. Another attraction is Polimoda’s show design program.

Pitney said there are people who wear many hats in life, dabbling in a little bit of everything.

“I want to wear the same hat, and accessorize it,” he said.