Before I Was: Moyers energizes WKU 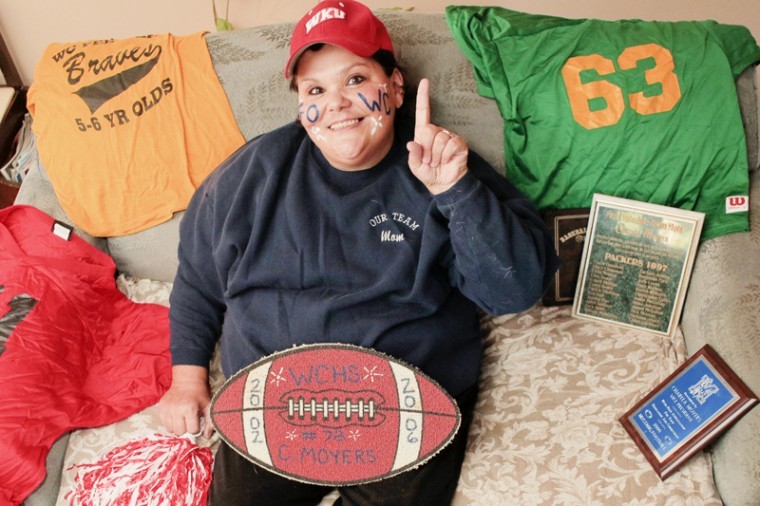 Charita Moyers said she loves who she works for: the students. "I watch them grow, listen to them if they broke up with their boyfriend or girlfriend."

Charita Moyers is known at WKU for her infamous birthday board and putting love on the hamburgers by making hearts with the ketchup.

Moyers, 49, works as the front line supervisor at Grille Works in Garrett Food Court. Before she came to the position at WKU, she worked at Tailgater’s Sports Bar. When the restaurant closed, Moyers was forced to go on a job hunt.

Working in the food industry for most of her life has always been her passion. Her parents bought a convenience store when she was 16 where she worked as the grill queen.

“I’ve always loved the public and fixing them something to eat,” she said.

On Sept. 9, 1999, Moyers was hired at WKU and since then, she’s become a familiar face for students in the food court.

On a white board next to Grille Works, she lists the students’ birthdays that she’s friends with on Facebook.

“I take pride in my birthday board,” she said.

Even after they have graduated, she posts a picture on Facebook, tags them in it and submits their names to WBKO.

“They might be far away from family,” she said. “It is a way to recognize them.”

Moyers said her heart beats for WKU and the students that visit her at Garrett regularly. She goes to all the theater shows and tries her best to go to all the sports games.

When her son, Chris, was 11, Moyers dedicated herself to being a sports team mom. She helped her husband, Willie Moyers, coach several PeeWee Football teams, including the Packers and the Falcons.

Willie, 58, said his wife helped with fundraising to make sure the teams had everything they needed.

“We bought all the football players jackets,” he said.

She also made sure there was enough money to feed the players and have Gatorade for them.

Chris, now 24, played on the football and baseball teams for his middle and high schools. He remembers his mom being just as devoted to the whole team as she was to him.

“She always brought great energy,” he said. “All the guys called her Mom.”

Chris said she would paint her face and wear a jersey with his number and “Mom” on it.

“She got everyone energized,” he said. “I was never embarrassed. I 100-percent loved what she did for us.”

Charita said as a team mom, she was responsible for checking grades, arranging fundraisers, informing players and parents of any changes, and planning the after-season parties.

She was the president of the Athletic Association at Moss Middle School while Chris attended.

Charita made sure the players were taken care of by sending them menus before game day so they would have their choice of what to eat.

Now, Charita said she’s watched Chris’ teammates grow up, get married and have babies of their own.

“My husband and son can’t go anywhere without meeting someone who knows me,” she said.

Her number of Facebook friends is close to 4,000, and many are WKU students. Although Charita has impacted many, she said they have impacted her too.

At Garrett, she tries her best to make sure she is full of smiles for students who visit her.

“I love these babies so much,” Charita said. “They put smiles on my heart.”