Family remembers Lawson as a fighter 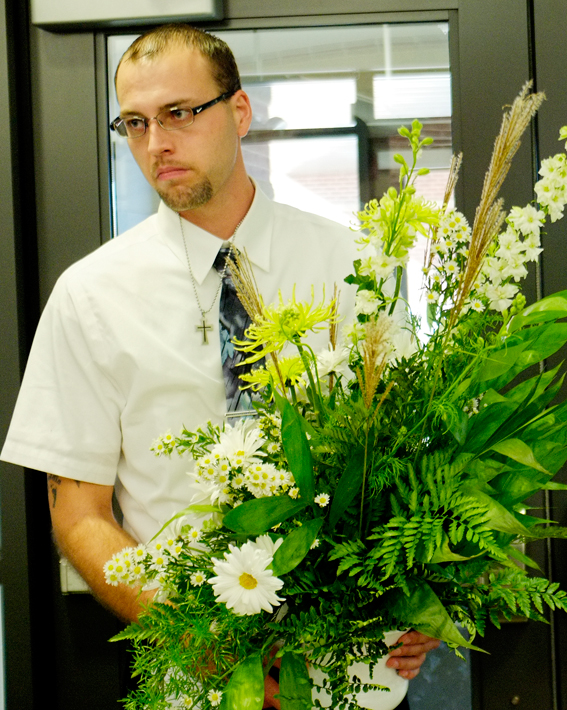 Rick Lawson, husband of 10 years to Trina Lawson, walks out of the memorial service held at WKU's Glasgow campus library. Lawson says there wasn't just one thing that drew him to Trina. "It was everything," Lawson said. "Her smile, her mad face shed give me, her laugh, the way we kid around all the time. We always made each other laugh."

Roberta Eich of Elmhurst, Ill., still remembers the day she brought her daughter, Trina Lawson, home from the hospital. She was 2 pounds 13 ounces and had been in the neonatal intensive care unit for three months.

Eich said even as a baby, Trina was a fighter.

“She was more than a fighter,” Eich said. “She wasn’t going anywhere.”

Lawson, 36, was found dead last Friday in a bathroom at Glasgow campus.

Family, friends and faculty gathered in the Glasgow campus library on Thursday to honor the mother of three and remember the good times. Religious studies professor and Church of Christ minister Van Robarts led the eulogy for a group of more than 50 people.

Melinda Rose, of Edmonton, attended the ceremony on her husband’s behalf, who had worked with Trina at Walmart.

“She was great and had a wonderful personality,” Rose said.

Lawson majored in social work with hopes of becoming a drug and alcohol counselor. Eich said her daughter had battled with substance abuse as well.

“She dealt with that in her own life,” Eich said. “But she rose above it all.”

Her grandparents, Delores and Mike DeFevers, said Trina was stubborn as a child but she loved everybody. She lived with the couple in Hawaii for a year when she was younger.

“She had a heart of gold,” Delores said, smiling. “Even if you hurt her, she’d forgive you.”

Lawson had a close bond with her grandfather, who was there when she birthed her first son, Travis, 16.

“I was the delivery coach,” Mike said.

Delores said Bubba plays baseball and often says he’s going to be “a number one draft pick” to the league. Naomi recently took first place in a gymnastics competition.

“I don’t know how she did as much as she did,” Delores said. “She was always there with the kids.”

Trevor Eich, Lawson’s brother, was at a loss for words about his sister. He managed to say she was great.

“We did everything together,” he said. “When it comes to brothers and sister, we had the best relationship.”

In her spare time, Lawson enjoyed spending time with her family, beating her husband in fishing and getting tattoos.

Her mother said although Trina faced a lot of adversity in her life, she always remembered two principles.

“Treat people how you want to be treated, and family is always going to be there,” Roberta said. “I’m proud of the fact that she turned out to be such a wonderful person.”