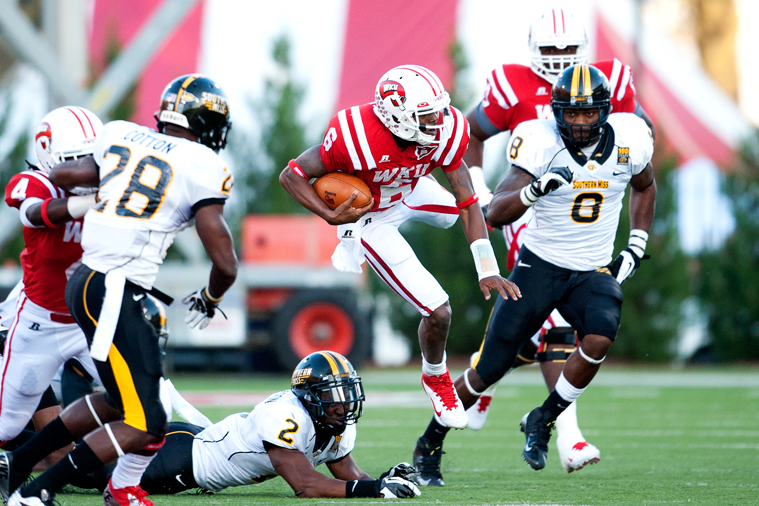 Fresh off of their first weekend since August without a football game, the Toppers have just a few days before their next game, on Thursday in Veterans Memorial Stadium against Troy (6:30 p.m, ESPNU).

Senior tight end Jack Doyle said the weekend off allowed WKU to work its schedule around the short week of practice.

He compared the work week to a regular week with a game on Saturday.

“It was nice having that bye week before because you came in Saturday, and Saturday was Monday,” he said on Monday at WKU’s weekly media luncheon. “Then yesterday was Tuesday, so today’s Wednesday. That’s just kind of how we’re preparing.”

The Toppers are in the midst of an 11-day stretch without a football game.

The Toppers will be out for their second Sun Belt win against the Trojans on Thursday.

Troy has been coached by Larry Blakeney for the past 21 seasons and is led on the field by junior quarterback Corey Robinson, who has thrown for 1,489 yards and six touchdowns so far this year.

The Trojans have been consistently strong under Blakeney, with five bowl appearances and 167 wins since he was hired in 1990.

They went 3-9 last season but have already equaled that win total through five games this year.

“I said earlier a Coach Blakeney team wasn’t going to be down for long, and he’s got those guys playing like Troy’s been playing in the past,” coach Willie Taggart said.

“We’ve got to go down there and play like our lives depend on it. That’s how we’ve been playing all year and it can’t stop now.”

Taggart said he’s seen improvement from Troy on both sides of the ball this season.

“Defensively they’ve improved a lot better than they were last year, and then offensively you just see them executing a lot better, then you look in the win-loss column — they’re back to what Troy is,” he said.

WKU topped the Trojans at home last November by a score of 41-18.

Doyle, who had six catches for 101 yards in that game, said the Toppers will have to play well at every position to get the win on Saturday.

“We’re really going to have to bring our ‘A’ game,” he said. “I feel like that’s something we really haven’t done as a team, so hopefully we can get that together.”

A win this weekend might help WKU’s poll aspirations as well. The Toppers received seven votes in the latest coaches’ poll but still haven’t gotten any attention in the Associated Press poll.

Senior defensive tackle Jamarcus Allen said rising in the polls is the last thing on the Toppers’ minds.

At 4-1, WKU is off to its best start since 2000 and creeping toward bowl eligibility.

Allen said the Toppers expect to be even better as they grind through the Sun Belt.

“The scariest thing is we haven’t played our best football yet,” he said. “Hopefully, we come out to this game and play the best game that we’re expected to play.”