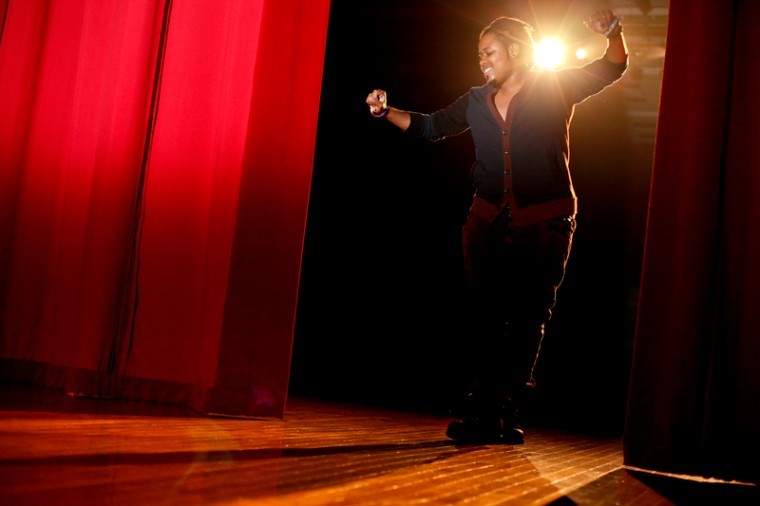 After three years of performing as drag king Sammie Luvv, Nashville senior Simone Lampkin talks about the recent closing of Ellis Place, where she and the drag community performed. “I miss it right now,” Lampkin said. “Ellis Place is where Sammie was born. If it wasn’t for Ellis Place I wouldn’t have been able to grow.”

Once a month, people in the community gathered at Ellis Place for Cabaret La Cage, formerly known as “Bowling Green’s home for premier female and male impersonation.”

However, last June, the building was purchased by Vino’s Restaurant, which left local drag queens and kings without a stage.

“I feel like a part of me has died,” Simone Lampkin said.

Lampkin is a Nashville senior majoring in sociology who enjoyed performing in the drag shows as her male alter ego, Sammie.

Lampkin said she was blindsided when she heard the news. She didn’t know it would be her last show.

The theme was Bowling Green Pride, and the group performed “Freedom” by George Michael. Lampkin learned the brand-new number to perform with the drag queens.

“Everyone loved it,” she said. “It was a joint effort, and it was fun.”

She was most proud that everyone joined in and put on a good show.

“We were together, working together,” she said. “Queens never do songs together.”

Not only did the performers rally together, but the crowd was also in tune.

Lampkin said it was the atmosphere that made the performance so great.

However, she said the previous owner didn’t announce to the public that the Cabaret La Cage would have to find a new home.

“We’d have found a new place sooner,” she said.

In a way, she feels that not having a place to perform is good because she can focus on her studies. But she said she’s bummed out that Sammie doesn’t have a home anymore.

To make matters worse, Lampkin was in a car accident coming back from an audition for a drag show in Smyrna, Tenn. She totaled her car and lost her drag show bag, which held flashy clothing and tools needed to transform into Sammie.

She hit a puddle of water and hydroplaned across four lanes of traffic.

“It took about 10 minutes before I realized I wasn’t dead,” she said.

Lampkin said her drag bag was run over by an 18-wheeler.

The closest place to go see a show is in Nashville at Play or in Louisville at Connections. However, Lampkin still wants to perform in Bowling Green.

“I don’t feel that everybody is making enough effort to look,” she said. “The people I meet, I try to network and talk about it to get it brought up to everyone’s attention.”

She hopes that someone will contact her about a new place for the Cabaret La Cage to perform again. Lampkin said Sammie grew up at Ellis Place.

Sarah McGuffey of Scottsville, went to many of the drag shows there. She said it got to the point that many people came to the show just to see Sammie.

“A lot of people come to see Simone to see what she’ll do next,” McGuffey said. “She went from not thinking she could, to owning the show.”

For McGuffey, drag shows were a night out with the girls.

“It didn’t matter, gay or straight,” she said. “That was our time out.”

“You would think she’s Sammie every day, she is so transformed,” McGuffey said.

Lampkin hopes Bowling Green will find another place for the drag community to go where they have no fear of judgment or violence because of who they are — that’s what Ellis Place provided, she said.

Since the building was bought, Cabaret La Cage hasn’t secured a new venue.

Vino’s owner Blake Leucht said the only reason the drag shows are no longer being held at that location is because Vino’s is a seven-day-a-week, full-service restaurant.

“It used to be a place you can rent out,” he said. “We can’t afford to close it once a month. It would be like closing Applebee’s.”

Until there is a new place, Sammie remains homeless.