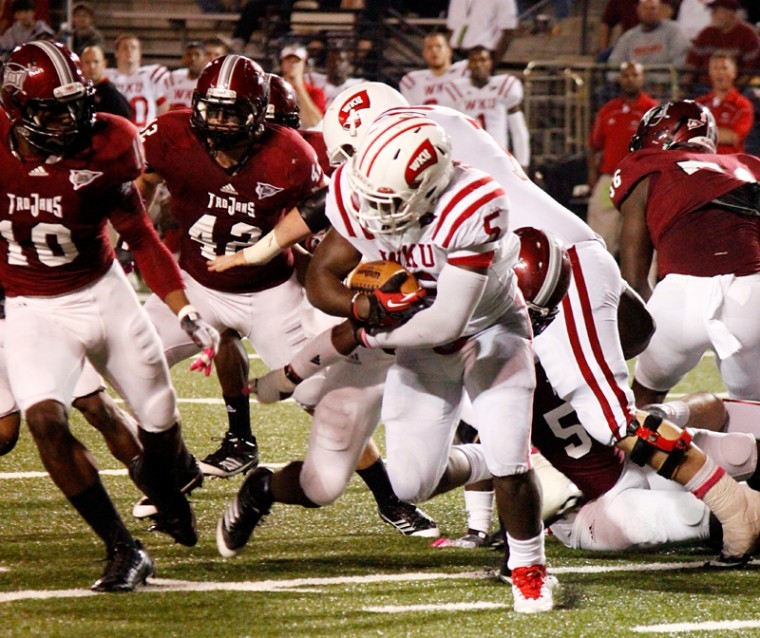 WKU running back Antonio Andrews (5) runs the ball against the Troy Trojans defense during a play at Troy University on Thursday, Oct. 11.

Junior running back Antonio Andrews had his sixth consecutive 100-yard game over the weekend, but he said he and the Topper offense will have to play better on Thursday if he wants to make it to seven in a row.

Andrews rushed for 159 yards and a touchdown against Florida International but the offense gained just 289 total yards on the night.

He was the clear star on offense that night, but Andrews said the Toppers will have to bring more energy to the field against Middle Tennessee.

“All we’ve got to do is just come out more physical,” he said. “We came out lackadaisical two weeks in a row and we’ve just got to fix that.”

The running back’s play this season cannot be described as lackadaisical. His six straight games with over 100 rushing yards is the longest such streak in the NCAA and he currently leads the Sun Belt Conference in nearly every major rushing statistic.

He will face an MTSU defense on Thursday that gives up an average of 187.4 rushing yards per game.

Andrews said the Blue Raiders are strong at every position on defense.

“They’ve got a d-line — they’re real good up front,” Andres said. “Their linebackers, they back them up, and they’ve got a good secondary too.

“We’ve just got to focus on what we need to do and if we come out physical we’re going to get the job done.”

It as a special game for WKU when the Toppers faced the Blue Raiders in Murfreesboro on Oct. 6 last season.

WKU came in to the game after an 0-4 start and low expectations for the season — a far cry from where the Toppers are this season.

That game, which featured a blocked extra point attempt by defensive lineman Jared Clendenin and safety by linebacker Andrew Jackson, went to overtime after the fourth quarter ended in a 23-23 tie.

Fullback Kadeem Jones got into the end zone for WKU in the first overtime, but the game went into another extra period when MTSU quarterback Logan Kilgore, who will start for the Blue Raiders on Thursday, threw a 25-yard touchdown pass.

MTSU settled for a field goal in the second overtime period, and WKU earned its first win of the season when quarterback Kawaun Jakes hit Bobby Rainey for a seven-yard touchdown strike.

Rainey did it all for the Topper offense that night — he compiled 166 rushing yards, 57 receiving yards, and two touchdowns.

Jakes, who finished that game 17-of-34 for 222 yards and a touchdown, said that getting first win was a weight of WKU’s shoulders.

“It was just a big fight for us to get that first victory last year,” Jakes said

That first win ended up being a season-changer for the Toppers – they went on to sweep their conference schedule and finish the season 7-5.

Defensive coordinator Lance Guidry said they gained confidence after winning that game, which helped them finish the season strong.

The win over MTSU last year was a change of culture for the entire football program – WKU has gone 13-3 in games since then.

“We really haven’t had a letdown, I would say, since that game, so I don’t expect one now,” Guidry said. “The kids have learned how to win, and it’s pretty special when those kids learn how to do that.”

Seeking an opportunity to simulate the conditions of the coming night game, coach Willie Taggart made a change to WKU’s normal practice schedule this week.

Instead of starting practice on Tuesday at 4 p.m., he pushed the start time back three hours to 7 p.m., closer to Thursday’s kickoff time of 8:15 p.m.

“I think it’s a good idea,” Guidry said Tuesday afternoon. “Coach wanted to go out under the lights and it’ll be around the same time.”

The weather forecast for Thursday night tentatively calls for temperatures in the upper-30’s and clear skies.

Guidry said it would be good for the Toppers to practice this week in similar conditions.

“It’s going to be cold out there and probably a little windy,” he said. “I think it’s good our kids get out there in that element and get used to it.”