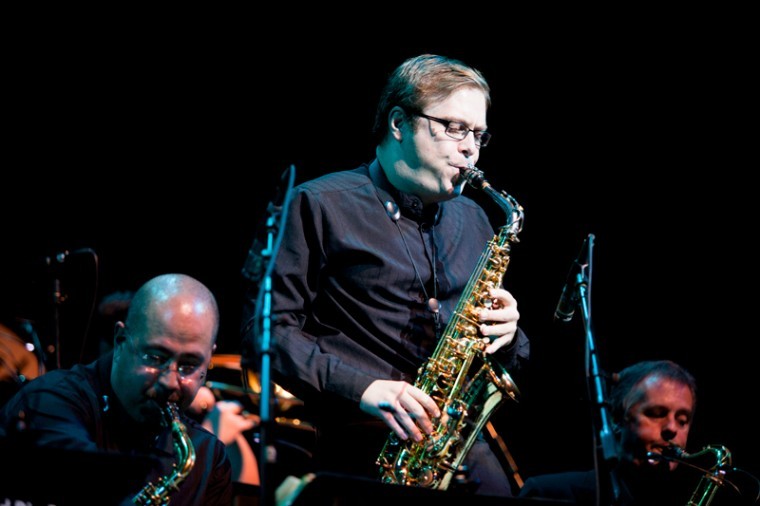 These were the sights and sounds heard in Van Meter Hall Monday night as the WKU community was entertained by The Birdland Big Band.

The Birdland Big Band, one of New York’s premier jazz clubs, kicked off this year’s Potter College of Arts and Letters Cultural Enhancement series. The band filled up the Van Meter Stage, boasting 15 of the most talented jazz performers around.

David Lee, dean of Potter College, introduced the group who is “setting the standard for 21st century jazz around the world.”

“We are honored to have Birdland Big Band here with us to kick off this series,” Lee said.

“Welcome to Birdland Jazz Club,” Igoe said with a grin. “No, just kidding. I know where we are.”

Between jazz pieces, Igoe told the crowd of around 200 that they’re one of the first audiences to see the “New York phenomenon” outside of its club home. He stressed that the band didn’t want to play simply a “concert,” but to allow the audience to go on a musical experience with them. According to Igoe, the band doesn’t pick out their set list until they’ve warmed up in that day’s performance hall.

“We’re so thankful you all are here,” Igoe said. “We’re almost to the point that we know what we’re doing, but we still want to be a little dangerous. Isn’t that what jazz is all about?”

The Birdland Big Band’s latest recording, “Eleven,” is up for four Grammy nominations.

Sophomore music major Nathaniel Nash said the concert was “fantastic” and he enjoyed it thoroughly.

“As a fellow jazz lover and trumpet player, I couldn’t miss a professional jazz band coming in from New York,” Nash said.

Owensboro sophomore Kiersten Richards said the concert really impressed her, particularly the musicianship of the band.

“The way their fingers just flew was incredible,” Richards said.

Up next for the Cultural Enhancement Series is Pulitzer-prize winning author Jon Meacham on Oct. 29 in Van Meter. Meacham’s presentation is entitled “The media’s secret bias: Liberals, conservatives, and the truth about the news.”