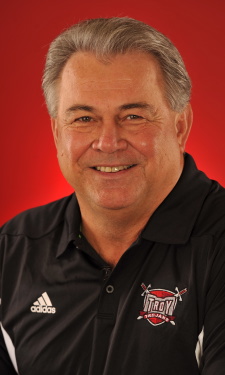 Troy coach Larry Blakeney may have called WKU the “measuring stick” of the Sun Belt Conference on Monday, but Willie Taggart said he’s not going to let the Toppers get suckered into talk like that.

“Coach (Blakeney) is a great coach and a great person too, but we’re not going to fall of that one,” the WKU coach said at WKU’s weekly media luncheon on Monday. “We haven’t won anything around here.

“I don’t know how many championships they’ve won — I know it’s a lot. It’s more than one.”

Taggart said he has respect for the Troy program, which has recorded winning seasons in five of the past six seasons. The Trojans are 3-2 this season, with their only losses against Louisiana-Lafayette and Mississippi State.

“You look at the win-loss column, they’re back to where Troy is,” Taggart said. “Their two losses were to two pretty good football teams.”

Troy had a head start on conference play and currently has a 2-1 record in the Sun Belt. The Toppers are 1-0 after beating Arkansas State in their first conference game.

WKU has six other conference opponents on its schedule after Troy, and Taggart said no game is an easy win in the Sun Belt.

“Any team in this conference can beat any ream and we have to go play our ‘A’ game,” he said.

The lights might be a little brighter when the Toppers hit the field on Thursday.

WKU and Troy will square off on national television Thursday night — the game will be televised on ESPNU.

“I told our team the other day, ‘here’s another opportunity to play in the spotlight,” Taggart said. “Great teams love playing in the spotlight and we’re trying to be a great team.”

Thursday will be the second time this season WKU has played on national television — its win over Kentucky was also on ESPNU.

Taggart said playing on national television is a good way to increase exposure for a football program.

“We’re trying to create a national identity and these are ways to do it,” he said. “We have to go down there and try and play the best ball that WKU can play. If we want people to know who we are, that’s what we’ve got to do.”

The game against Troy is the first of two Thursday night games for the Toppers this year. They will take on Middle Tennessee State at home on Thursday on Nov. 1.

Taggart said he doesn’t have any problems with playing on a weeknight.

They might not have had a game, but the Toppers said their bye week was hardly a week off.

WKU had practices over the weekend in place of a game as it prepares to take on Troy on Thursday.

“It’s a little different after a win, having a bye week,” Doyle said. “You get in and focus on the things you need to focus on and we got some good work in.”

Taggart said the bye week was the direct cause of an especially good practice for WKU on Sunday.

“I think that bye week helped, being able to prepare a little bit,” he said. “We got out of practice a little bit earlier then we had been because of the way we were repping plays and not a lot of repeats.”

The coach said preparation hasn’t been a problem for the Toppers at any point this year.

“That’s one thing this football team has been able to do is prepare — been doing a great job of preparing all year long,” he said. “I think that’s why we’re getting the results that we’re getting.”

Homecoming Hilltoppers won’t be the only ones watching when WKU takes on Louisiana-Monroe at home on Oct. 20.

The game, scheduled during WKU’s homecoming, has been picked up and will be televised on ESPNU.

WKU and ULM have had two of the highest-profile Sun Belt seasons this year.

The Toppers have the best record in the conference and the Warhawks burst onto the national scene when they beat then-No. 8 Arkansas in their season-opener.

Kickoff for the ULM game is scheduled for 3 p.m. at Smith Stadium.