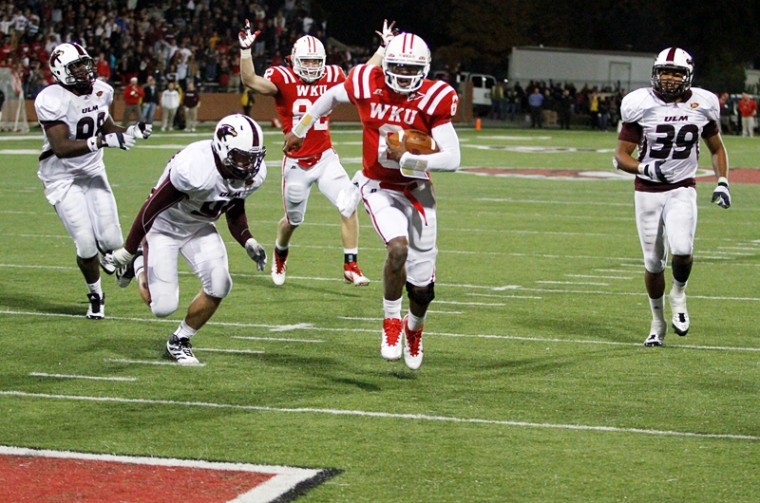 Senior quarterback Kawaun Jakes (6) runs in for a touchdown during overtime at L.T. Smith Stadium for the WKU homecoming game against Louisiana-Monroe on October 20. The Hilltoppers lost in overtime, 43-42.

WKU hosted Louisiana-Monroe for its Homecoming game this weekend, but for some football players, this Saturday’s game at Florida International will be more about going home.

There are currently 32 players from the state of Florida on WKU’s roster, and several hail from areas close to Miami, where the Toppers will face FIU this weekend.

Coach Willie Taggart hails from Florida as well, graduating from Manatee High School in the mid-1990’s.

Manatee is located in Bradenton, Fla., which is close to Tampa. Bradenton is home to several standout Toppers, including sophomore safety Jonathan Dowling and freshman running back Leon Allen.

The coach said he will have about 40 guests from his home state in the audience.

“Some of them are going to have to pay — that’s too many tickets,” he said on Monday.

Taggart already has his guest situation worked out, and he said he’s urged players from Florida on the team to do the same as soon as possible.

“I just told them to get their ticket situation out of the way before practice (on Tuesday),” he said. “Talk to your family and get all that out of the way, because we’re not dealing with tickets once we start practice this week.”

Sophomore wide receiver Willie McNeal, another Bradenton native, apparently took that advice to heart. He said he’s excited to play in front of a Florida crowd.

“I’ve got a lot of people coming to the game,” McNeal said. “It’ll be good, it’ll be fun to be back at home playing in front of my family.”

Taggart liked much of what he saw from ULM film

Despite the fact that his team walked away empty-handed, Taggart said he was impressed with a lot of things the Toppers did on the field when he went back and watched film from Saturday’s game against ULM.

WKU also looked strong in the rushing game. Junior running back Antonio Andrews ran for 104 yards and a touchdown and junior Keshawn Simpson got his first carry since injuring his knee in the season-opener against Austin Peay as the Toppers gained 182 yards on the ground.

The WKU defense didn’t do as well. The unit had one of their weaker performances of the season as it gave up 43 points, the most its surrendered this year, and allowed ULM quarterback Kolton Browning to make plays down the stretch.

Taggart said part of the WKU game plan was to try to shut the dual-threat quarterback down.

“I think we had like seven missed tackles on their quarterback by himself,” he said. “We knew going into the game we couldn’t do that.”

The coach said WKU now faces the challenge of rebounding. The Toppers had not lost a Sun Belt Conference game in over a year before dropping their latest contest against the Warhawks.

He said WKU has to continue to focus on improvement.

“We’ve got to go out and do our best to play a lot better than we did last week,” Taggart said.

Toppers moving on quicker than usual

Win or loss, Taggart usually gives his team 24 hours to move on from a football game before they start to focus on the next one.

He issued a mandate on Twitter on Sunday, the day after WKU fell to ULM — this week, the Toppers would cut six hours off of that period. This time, the team would be moving on after 18 hours.

Taggart said losing to the Warhawks was not the end of the world and he didn’t want his team acting like it was.

“I just tried to nip it in the bud and just wanted to move on,” he said.” We watched that tape and told our guys we have to learn from our mistakes and correct those things and see to it that we don’t do it again.”

“He wanted us to kind of get an extra step ahead with FIU so that we can gameplan a little bit better and lock and load better for that game,” Lewis said. “There’s nothing we can do about the previous game.”

– Simpson made a quiet return to the WKU run game this weekend, taking one carry for no yards. It was his first action on the field since Sept. 1 against Austin Peay. Taggart said on Monday that the coaching staff plans to slowly work Simpson back into the running back rotation.

– Andrews suffered a slight hamstring injury against ULM but Taggart said he should be on the field at FIU on Saturday. He is still ranked No. 2 in the country in yards-per-game with a 202.7 average.

– Senior tight end Jack Doyle pulled in two touchdown receptions against ULM on Saturday, a single-game career high. It was his second consecutive game with a TD catch — before last Thursday’s game against Troy, he had gone over two years without getting into the end zone.