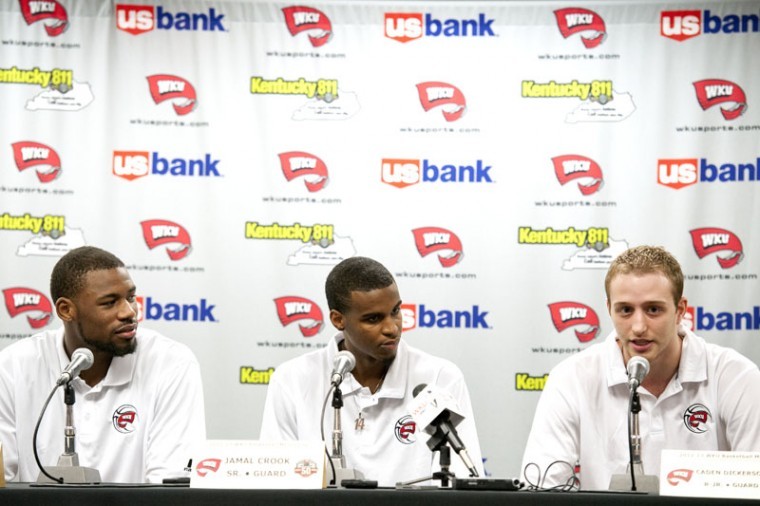 Basketball on The Hill has a new look this season, and it was evident at Media Day on Wednesday.

Ray Harper and Michelle Clark-Heard, entering their first years as head coach of the men and women’s teams, took the Diddle Arena podium to usher in a new year of WKU basketball.

The men’s season kicks off with an exhibition at home against Campbellsville on Monday, while the Lady Toppers will play their first game on Nov. 2 in an exhibition against Harding University.

The changes at the top of the teams reflect the changes the two programs have gone through in the past year.

The Lady Toppers, for instance, will be coached by an entirely new coaching staff this season.

Heard said her new assistants, Greg Collins, Margaret Richards and Curtis Turley, have brought the same intensity she expects out of her players.

“They bring a ton to the table for me experience-wise,” she said. “…We have to bring our energy so our players can understand what we’re all about with our passion and what we’re trying to get back to.”

In addition to a new coach, the Lady Toppers have several new players, including five freshmen.

Junior guard Chaney Means is the only player that’s been on the team for more than two years, and has taken on much of the leadership role.

“It’s been good for me to talk to the freshmen and let them know how things are,” she said. “I have experience with that, and I let them know it’s going to be OK.”

As for how the Lady Toppers feel about their new coach, sophomore guard Alexis Govan said the team has already formed a strong relationship.

“From the first day she came in, she told us she had an open-door policy and that we need to come in and talk to her, because that was the only way we were going to get to know her,” Govan said. “I think most of us feel like she recruited us because our relationship is that strong.”

The men’s team, by comparison, has enjoyed more consistency. Harper is entering his first full year as head coach, as he took over the job midway through last season.

Senior guard Jamal Crook said the Toppers have the benefit of knowing what to expect under the coach.

“Day in and day out, we know what we’ve got to give and coach Harper, he harps about that, especially the toughness,” Crook said. “That’s the main thing that we’ve got to focus on, is being tough and never letting up.”

The Toppers were picked by Sun Belt Conference coaches to finish No. 3 in the East division this season.

Some might take that as disrespect, as WKU is fresh off of a conference championship and NCAA Tournament berth, but Harper said he doesn’t feel slighted by the prediction.

“Who cares about preseason rankings?” he said. “…It’s not about where you start, it’s where you finish.”

Sophomore forward George Fant was in agreement with the coach. He said the Toppers are more focused on improving this season rather than listening to people guess how they’ll finish the year.