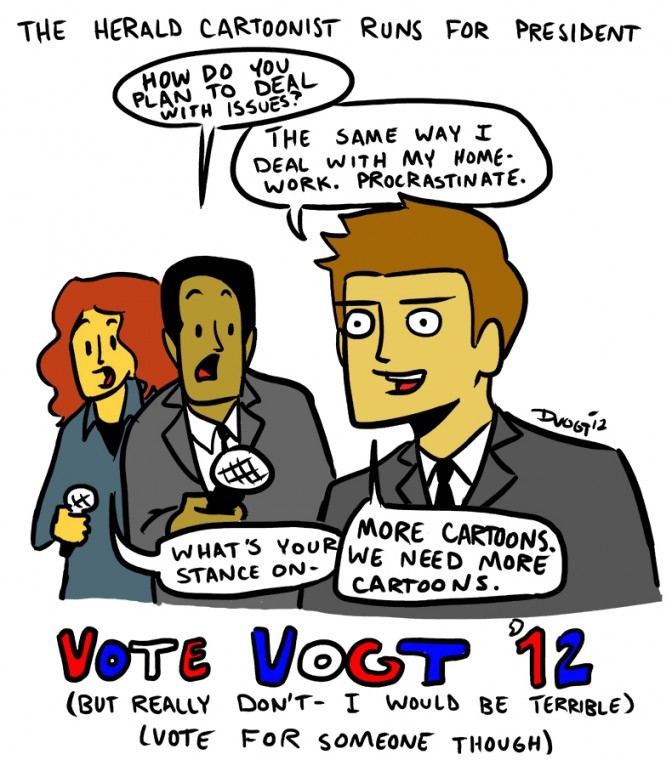 THE ISSUE: The first of three presidential debates between President Barack Obama and Republican nominee, Mitt Romney, took place last week at the University of Denver. The debates mark less than a month until the November election.

OUR STANCE: The Herald is excited to see a large amount of students tweeting and posting statuses on Facebook during the debate. It seems that students are tuned in this election cycle.

With one month until the Nov. 6 presidential election, things are starting to get interesting and students are taking notice. There were a reported 10 million tweets for the debate last Wednesday night, according to CBSnews.com, with hundreds of thousands happening in less than a minute. On Facebook, it was the third-highest event ever to be discussed on the social network. No doubt many WKU students played a role in these numbers.

Even on WKU’s own campus, voter registration has seen high turnout rates with several campus organizations and President Gary Ransdell helping out, along with Big Red.

All of this spells a fascinating time in America right now and, similar to 2008, there is a lot of excitement. And what makes the 2012 election different for the majority of current WKU students is that they are now able to vote.

As it was widely reported, young people — college-aged students — played a huge factor in Obama’s 2008 victory, displaying the power people have when they choose to use their constitutional rights.

Political affiliations aside, the Herald wants students to take advantage of the rights they do have. Continue to watch the debates, follow reliable news sources, and be as informed as you can on the issues. The Herald has attempted to help, and this was the reason behind starting “CHH Politics” this semester.

It’s not just the presidential election that is important, either, though they are what what get most of our attention. State and local elections will take place on Nov. 6 as well, many that may have a more immediate and closer impact on a student in Bowling Green, Ky., than national legislation.

The downside of this is that when you don’t vote you risk having a candidate you don’t believe in win and potentially enact legislation that affects you in ways that aren’t beneficial to your life. As the age old question persists, how can you complain if you do not vote?

The “my vote doesn’t count” adage has grown tired and trite. One does not have to look far to see instances, many recent, that show votes do in fact count and have much swaying power in tight elections. And if the polls are any indication, the 2012 elections will be tight.

There’s no school on Nov. 6 so there is no excuse to not find a polling place and cast your vote. And with many hot-button and pressing issues at the forefront of this election, one will be hard pressed to find someone who will not be affected in someway. And just like the beauty of our political system, people have the ability and opportunity to help make the decisions they want.

The editorial represents the majority opinion of the Herald’s 13-member editorial board.