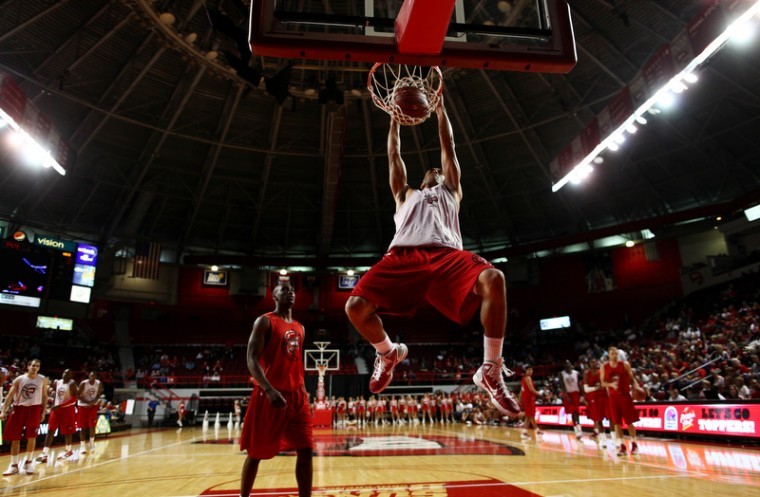 Local sports fans have two distinct choices to pick from on Friday.

At 6 p.m. in WKU’s Diddle Arena will be Hilltopper Hysteria, the school’s annual men and women’s basketball tip-off showcase.

The game allows fans to see Kentucky’s top-rated team in Class 5A, Bowling Green, play a team ranked second or third in most Class 5A polls, Warren Central, in a district game between two rivals.

Lindsay Boyden, assistant AD (marketing) at WKU, is confident Hysteria can draw a large crowd in spite of the high school game because of the “nonstop” atmosphere the event offers, she said.

Much of the focus in Boyden’s department has been adding events to Hysteria to make it more exciting, she said.

There was no men’s basketball dunk contest in 2011. Players and coaches also didn’t choose individual walk-out songs during team introductions.

A dunk contest, 3-point shootout and introduction songs had been staples of past Hysterias, and Boyden said she wanted to bring those elements back.

“I got a few complaints, and it was ‘Bring back the dunk contest’ and ‘We like seeing what songs they pick out,’” she said. “It was just something fun… It’s rare you get to see (players) in that light, and it’s a chance to engage the fan base.”

Other promotions include free T-shirts to the first 500 fans and giveaways to Dierks Bentley’s Homecoming concert next Thursday in Diddle.

Despite all that, James Brandenburg, who covered both events during nine years at Bowling Green’s WBKO-TV, said BGHS-WCHS has more appeal than Hysteria to the average fan in town.

Large numbers of WCHS and BGHS alumni still supporting their alma maters’ football programs, plus the fact Hysteria isn’t an actual WKU basketball game, contribute to that, he said.

“I think on a night where a lot of people look at (Hysteria) as an exhibition, the appeal is going to be a little less than it would be for high school football when those two teams are playing a district game that counts, and they’re two of the best teams in the state in their class,” Brandenburg, now a freelance reporter at WLKY-TV in Louisville, said.

This is the second straight year Hysteria and the BGHS-WCHS game fell on the same night.

WKU’s athletic department wouldn’t completely rule out moving the event to another night in the future to avoid conflicts with high school football, Boyden said.

However, she said that idea wasn’t discussed this year. Boyden said she preferred a Friday model because it came on a good night for families, was a consistent date and allowed volleyball to be included in the festivities.

“We do face Friday night football, but I’d like to think we’re the better show,” Boyden said. “No offense, but we’re completely different.

“It’s not like we’re playing football, we’re playing basketball. And goodness knows people love basketball in this state. It’s competing, but hopefully we get our fans here, and I think they’ll have a really good time. With all the things we’re bringing back, I’m really excited.”

Harper has taken part in Hysteria in the past as an assistant and said the night gives fans a chance to get a closer look at players’ personalities beyond their jump-shooting or defensive abilities.

“You’ll also get the chance to meet these kids and know, other than basketball, the type of kids that we’ve got in this program,” Harper said. “It’s going to be a fun evening.”

But even the chance to see new coaches and players might not be enough for Hysteria to out-draw BGHS-WCHS.

WKU faces a different challenge when competing against an important high school football game than a school like Kentucky, Louisville or Indiana would, Brandenburg said.