WKU’s Doyle excels as student, teacher at ‘Tight End U’ 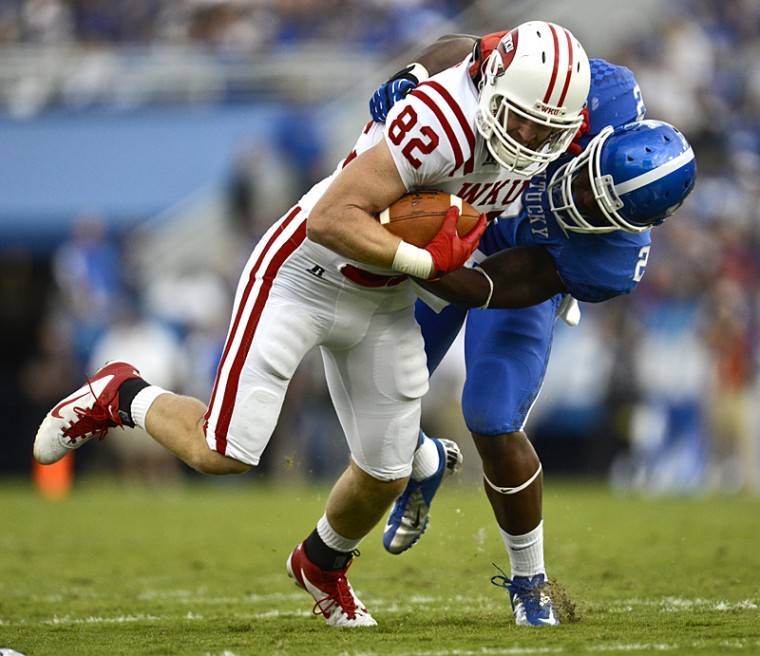 Jack Doyle said he didn’t just get the monkey off of his back when he scored his first touchdown in two years against Troy last Thursday.

“It became more of a gorilla than anything,” the senior tight end said. “It was good to get it out of the way, but it wouldn’t have mattered if we didn’t win.”

Anyone who saw Doyle catch the ball, fall back and throw it in the air  while WKU’s sideline celebrated, knows the catch meant a lot to Doyle and his teammates.

Despite being the leading pass-catcher for WKU in the past two seasons, the tight end hadn’t put points on the board since Oct. 9, 2010.

“We were going crazy,” Jakes said of Doyle’s teammates on the sideline. “We knew it would come sooner or later — we just had to stop pressing it. Hopefully, it just keeps rolling.”

Third-year coach Willie Taggart was in his fifth game at the helm for the Toppers when Doyle got his last touchdown.

He said he had tried to run plays to get him in the end zone since then. When those fell through, Taggart always had verbal encouragement for the tight end.

“I always told Jack, ‘It’ll be just like that jar of olives — once you get the first one out, the rest will come pretty easy,’” Taggart said. “Hopefully, he’ll keep rolling for us now.”

Doyle and Jakes have been teammates for five years, through the thick and thin of WKU’s transition to the Football Bowl Subdivision.

Jakes said Doyle set an example that anyone on the team can follow, regardless of position.

“If you want to do something right, just watch Jack,” he said. “He leads by example, and he’s just a good dude.”

Doyle’s one of six tight ends on the WKU roster, but he’s the unquestioned leader of the group that calls itself “Tight End U.”

Sophomore tight end Mitchell Henry said Doyle is like a coach in uniform when he’s out on the field.

“If you need to know where to go or anything, he’s always helping you out,” Henry said. “It’s just like having another coach out there.”

His demeanor on the field is no coincidence. Doyle, in his last season playing for WKU, is majoring in physical education and plans to coach football at the high school or collegiate level after his playing days end.

He has experience in almost every area of the game. The tight end position is unique because the player is usually expected to play a versatile role on the team — he might be blocking a defensive end on one play before playing as a pass-catcher on the next.

“We call ourselves ‘the great adjusters,’” he said of the tight ends. “We’ve got a lot of things to know in the pass game and we’ll even block in the pass game as well. It’s not just running routes and run blocking — there’s a lot to know.”

Doyle led WKU in receptions and receiving yards last season and currently has the most catches of anyone on the roster this season.

With his time as a player running out, he said he relishes his role on the team with his fellow tight ends, be it on the field or in the film room.

“We’re a close group of guys,” he said. “We have a lot of fun together, and when it’s time to work, it’s work. We have a ton of talent in that room, so it’s just fun.”

He said the Toppers plan to put on a show this Saturday against Louisiana-Monroe during his final Homecoming game.