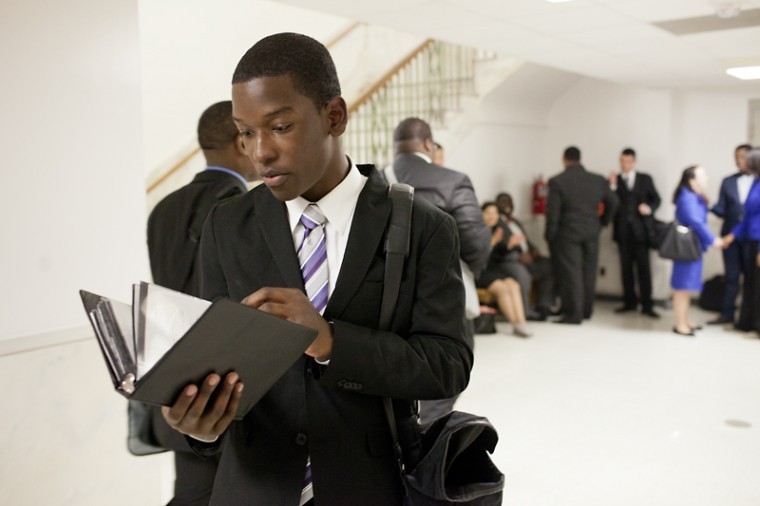 Nick Gilyard, junior, of Miami, Fla., pages through his binder during the last few moments before his Duo Interpretation event begins at the WKU/MU Fiesta Speech and Debate Tournament in the basement of Cherry Hall on Sunday, September 30, 2012.

The WKU forensics team co-hosted and took place in a two-part tournament over the weekend.

The other co-host was Miami University of Ohio.

WKU didn’t win overall — or in forensics jargon, “sweepstakes” — for either tournament, because host schools do not enter sweepstakes, even though they had enough points to win Sunday.

Dawn Lowry, individual events coordinator, said the students put in a lot of work to get ready for the tournament, which lasted from Friday to Sunday.

“We put in hours of practice every day,” Lowry said. “On the weekends, they’ve been working extremely hard preparing for this tournament.”

“The kids have worked hard to become a competitive force,” Lowry said

WKU’s team closed out the semi-finals in a debate category, winning the top four spots for the Lincoln-Douglas one-on-one debate.

Even though this tournament was the first for individual events, the debate team has had one tournament already.

Chris Joffrion, director of debate, said there is a lot of pressure on the team, because they finished second in the nation last year instead of first for the first time in years.

“At Western, we take speech and debate as seriously as the university takes athletics,” Joffrion said. “They work just as hard as athletes do.”

Members of the team took home several of the individual events.

“I like duo interpretation the best, because it’s the only event that you get to work with a partner, and so you get to play off each other’s reactions and kind of like show a relationship building,” Covert said.

Covert and his partner, Emma Wilczynski, earned second place in the duo interpretation event on Saturday, despite “first tournament jitters.”