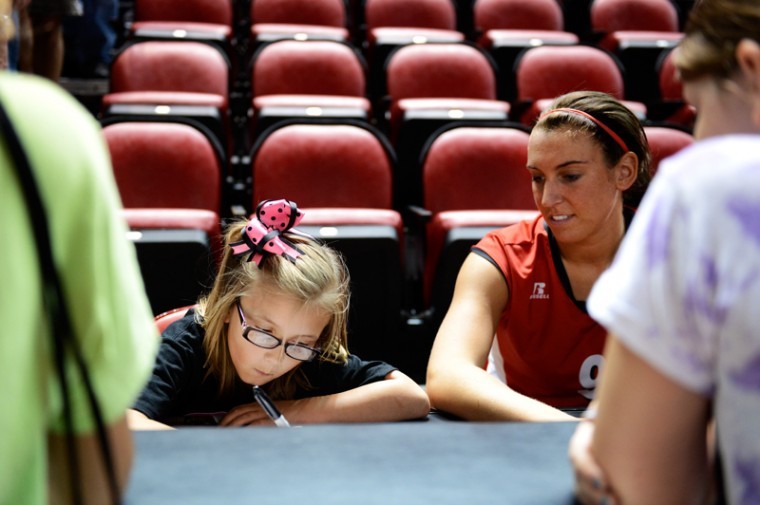 Harlie Bryant, age 6, and Paige Wessel, No. 9, sign shirts and posters together for HopeForHarlie.org after WKU's game on Saturday in Diddle Arena.

Harlie Gail Bryant, 6, hasn’t had a typical life for a girl her age.

The doctor noticed she had nystagmus, or rapid eye movement, and wanted Harlie to see an ophthalmologist.

A CT Scan last April revealed Harlie had a tumor the size of a softball in her brain, directly behind her eyes.

Surgery only removed 15-20 percent of the tumor, and chemotherapy treatments have been routine over the past year.

During that time, Harlie couldn’t go outside and play or have friends visit her at home.

A few years ago in the team hotel on a road trip, Hudson watched a segment on “Real Sports with Bryant Gumbel” about a 9-year-old girl named Jaclyn Murphy who was diagnosed with a malignant brain tumor in 2004.

Murphy, a lacrosse player, was adopted as an honorary member of the Northwestern women’s lacrosse team.

Murphy’s parents later started The Friends of Jaclyn Foundation, or FOJ. The organization “improves the quality of life for children with pediatric brain tumors and their families by pairing them with college and high school athletic teams,” according to its website.

“After I saw that sitting in the hotel room, I got online and signed our team up and forgot about it,” Hudson said.

This August, Harlie was matched up with the Lady Toppers to become the youngest and newest member of the team.

Harlie attends every Lady Topper home game in Diddle Arena. While there, Harlie does pregame drills with the team, is introduced in the starting lineup and watches the match from a reserved seat on press row with her parents.

Harlie’s father, Jamie, said the whole experience with the volleyball team and WKU has been “unreal.”

“I can’t explain it how (Hudson) has really took up not just Harlie, but our whole family,” Jamie said. “He’s been great, the whole university has been great. It’s just unreal.”

A melanoma survivor himself, Hudson said he’s been able to connect with the Bryants on a different level.

“You understand the challenges and the fears that go with it,” Hudson said. “If we can ever do anything to help another family, we certainly want to do that.”

“It’s helped her be a kid again,” Jamie said. “Her not being a kid was the biggest worry I ever had through this whole deal.

“It’s the biggest joy for me and my wife to see her run around with the team and enjoying being a kid.”

Harlie said her favorite part of each game day is doing stretches during pregame warm-ups.

She also stays in touch with players when not on the court, texting the team during the week.

“We wanted her to have a phone so we could communicate with her,” senior outside hitter Jordyn Skinner said. “She likes to send us text messages that are three pages long just of smiley faces.

“It’s just a way for her to brighten our day and for us to hopefully brighten hers.”

Harlie is an energetic girl who doesn’t talk much at first but never stops talking once you get to know her, Potts said.

“I call her on Wednesdays just to talk,” Potts said. “We talk about school, we talk about boys. She has a different boyfriend each week.”

“She has gotten so much better,” Skinner said. “When she first came in here I don’t think she knew what a volleyball was.

“She’ll come in now and show us how hard she can serve and she just loves it.”

The 2012 Lady Toppers are 22-3, enjoying one of their best seasons in program history. Hudson said WKU’s success might have something to do with their young secret weapon, who might as well be an early official recruit for the 2024 Lady Topper team.

“She seems to be a good luck charm to this point,” Hudson said. “Western volleyball is playing at a level never seen before and that has a lot do with players, and she is a very important player to this team.”

Saturday’s match against Florida Atlantic was dedicated to the Hope for Harlie foundation.

The Bryant family was introduced to the crowd in Diddle Arena while a video tribute played and donations were taken.

The foundation raises money for the family to ease the financial burden of medical bills.

Her next treatment is proton radiation therapy, during which her mom and dad will leave their jobs for almost three months to take care of Harlie.

For more information or to donate money, visit hopeforharlie.org.

“If my players showed up with as much energy and passion every day as her, then we would never have a problem,” Hudson said. “She’s just a special little kid that has so many challenges on a daily basis, but that’s not how she chooses to live.

“That says a lot about her family. They have a lot of hardship and challenges they’re going through, but they’re such a beautiful family and she’s an inspiration on a daily basis.”