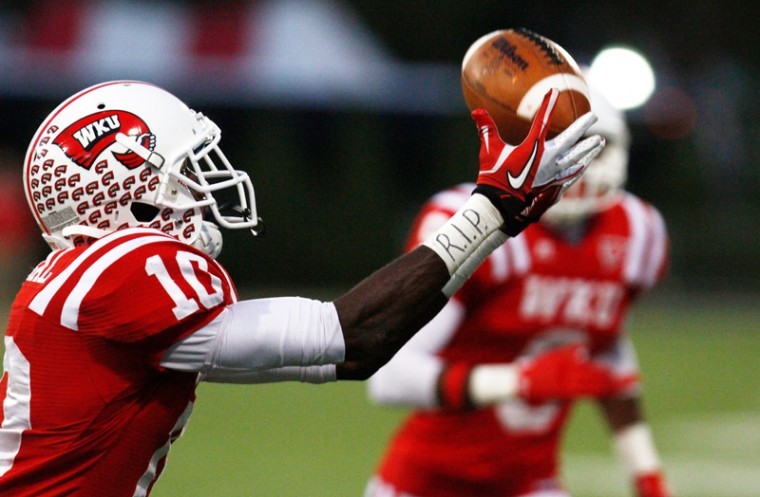 WKU Sophomore wide receiver, Willie McNeal, (10) catches the ball for a touchdown just before overtime during the WKU-ULM football game.

WKU’s loss against Louisiana-Monroe might knock them out of first place in the Sun Belt Conference, but it hardly dashes hopes for a conference crown.

The Toppers (5-2, 2-1 SBC) are currently in a five-way tie for second place in the Sun Belt after dropping their first conference game. ULM currently leads the conference at 3-0, the only unblemished record left.

Coach Willie Taggart said his team was well aware of the stakes that were involved with the game.

“Whoever won this ballgame was going to take sole lead in the conference so it was big-time for both of us and both teams were playing really well,” he said. “Unfortunately we came up on the other end of that stick, but we cant put our head down and worry about it.

“Nothing we can do now but get back to work and see to it that we don’t let that happen again.”

Senior tight end Jack Doyle, visibly disappointed in the postgame interviews, said the Toppers can still win the conference as long as they stay focused on winning their remaining five games.

“It’s out of our hands a little bit, but we’re going to take care of what we can control and we’ll see what happens,” Doyle said.

The Toppers can put themselves in a much more desirable bowl position by winning out in their next five games.

WKU had one Sun Belt loss last season and got shut out of a bowl bid, but Taggart said the Toppers’ 3-1 non-conference schedule this season could go a long way for their bowl hopes.

“We’re in a better position than we were last year overall,” he said. “Only thing we can do now is control the things we can. We’ve got five games to control and it’s on us.”

WKU has been looking for a long time for a wide receiver to separate himself from the pack as a top pass-catching threat.

The Toppers may have found just what they were looking for in sophomore Willie McNeal.

McNeal, who redshirted last season after tearing his ACL at spring practice in 2011, pulled in seven catches for 120 yards and a touchdown. Those kind of numbers are uncommon for a receiver in WKU’s offense — the majority of throws usually go to tight ends or running backs.

McNeal said the Warhawks made adjustments on defense throughout the night to keep the Topper offense in check.

“I noticed at first they played off-man, but they stayed in man coverage a lot,” he said. “On third down they went to a lot of cover two and brought the safety over top.”

No one is happy about a loss, but Taggart said he was pleased with the way his team handled finishing the game empty-handed on Saturday.

The coach said he was pleased that his team was disappointed with the outcome.

“We can be upset, we should be upset, and our guys are,” he said after the game. “It was good to see that they were really ticked off because they know we didn’t play our best ballgame.”

Taggart said he stressed to the Toppers that this was just their second loss of the year and there’s a lot of football left to be played.

“I just told them, ‘Don’t kick your head around and pout and throw your pads all over the place – we’re not doing that any more. I want you to be upset, I’m upset too, but we’ve got five ballgames and that’s just the second loss on the season,’” he said. “We can’t put our head down and then turn the other way, we’ve got to suck it up, get back to work, and see to it that it doesn’t happen again.”

Students and alumni filled the stands on Saturday as the Toppers celebrated Homecoming in front of one of WKU’s largest crowds ever.

The official attendance, according to WKU, came to 22,323 people. That’s the second-largest crowd to ever attend a game at Smith Stadium, coming in just behind the Southern Mississippi game last month.

The Toppers won’t play in front of a home crowd again until Nov. 1, when Middle Tennessee comes to town.