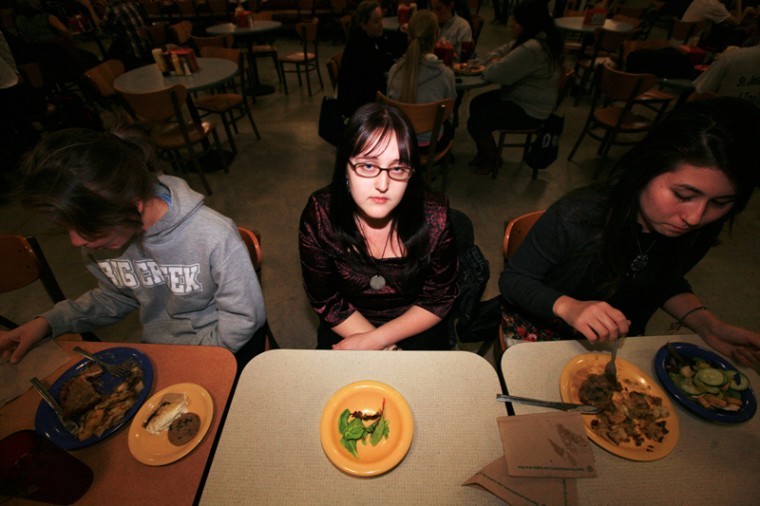 WKU senior Dora James of Hartford was diagnosed with Celiac disease when she was 16 years old. While living on campus during her first 2 years at WKU, James had to use meal plans and had limited options for meals. "I got so sick of eating salad during my freshman year." James says. James ended up hospitalized several times due to gluten contamination. "When you live on campus it's like your home but functions as a business; quantity over quality, and when you have Celiac, quality is pretty damn important." James says. Dorothy Edwards / Herald

When Dora James lived on campus during her first two years at WKU, she spent more time worrying about what to eat than she did about her studies.

The Hartford senior has celiac disease, an autoimmune disease that causes damage to her small intestine when it’s exposed to a protein called gluten.

James, like other students on WKU’s campus with celiac disease, can’t be exposed to foods with gluten in them, such as wheat, barley, rye and oats, without becoming ill.

James said when she came to WKU, she discovered there aren’t many gluten-free options on campus — despite what WKU Restaurant and Catering Group told her when she first came to WKU.

“They assured me there would be gluten free food,” she said. “And if I wasn’t sure about anything, I could go find one of the head chefs and talk to them, and they would tell me what was in it and how it was made, and they would make something gluten free for me if I didn’t have anything to eat.”

James, who was diagnosed with the disease when she was 16, tried to become exempt from the required meal plan because of her limited eating options, but dining services told her she had to purchase one.

She said she would try to eat sandwiches in Fresh Food Company made with gluten-free bread, but when the same cutting board, gloves, knife and toaster that had touched other breads were used to prepare her sandwiches, it made her sick.

“It seems pretty impossible for somebody with celiac disease to live on campus with a meal plan and not get really, really sick, but that’s the problem because as a freshman I was required to buy a meal plan,” she said.

Gary Meszaros, assistant vice president for Auxiliary Services, said whether or not a student is granted an exemption depends on what the Aramark dietician or Health Services nutritionist says about the student’s needs once a student meets with them.

“They can design a menu for them and find a diet necessary that they can eat — everybody’s got to eat something,” Meszaros said. “If they can’t meet that diet, they’ll let them off the meal plan.”

In addition to meeting with a dietician, Davis said students must register with his office.

He said that in the past dining services have created a meal plan that adjusts to food that students can eat, but it is on a case-by-case basis.

Louisville senior Bryan Katzman, who also has celiac disease, said as a freshman he came to WKU not knowing what he would be able to eat.

Like James, Katzman said he had to buy a meal plan in his first semester, but was allowed to opt out of it his second semester.

Katzman said when he had a meal plan he asked those in charge of the food areas what he could eat, but struggled with the options.

“It was hard to find something to eat,” he said.

Katzman said he was able to find food to eat, just not on campus.

His mom moved to Bowling Green at the start of his freshman year to help him manage any problems related to celiac disease.

After living off-campus with friends since her junior year, James said she doesn’t stress about the food she’s eating.

“I cook all my meals and I know where they come from, so I don’t have to worry about getting sick,” she said.