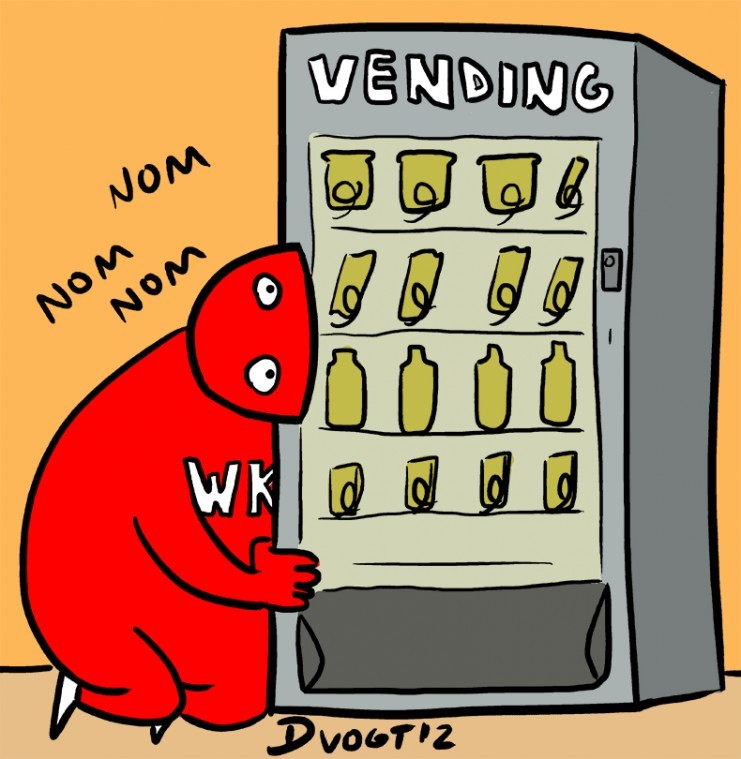 THE ISSUE: South Campus food court has been closed since the beginning of the semester. It has been replaced with a grab-to-go option in the bookstore. Officials said declining sales was the reason for the move.

OUR STANCE: The food court needs to be reinstated, because what South Campus is left with is not comfortable or convenient enough. In a decision that affects thousands of people, they should have been notified of this change rather than showing up to discover there is no longer a food court.

While students on Main Campus are disgruntled over long lines and delayed restaurant openings, students who attend South Campus for classes are stuck with cold cut sandwiches.

Officials said the food court was closed because it had seen declining sales over the past two years.

“Auxiliary services are self-supporting. It’s not based on tuition dollars,” assistant vice president of Auxiliary Services Gary Meszaros said. “We tried different menus and options — we weren’t breaking even. We weren’t making money.”

The replacement of the food court, grab-and-go options in the South Campus bookstore and vending machines, is being called more “efficient” for students.

Though the food court closing brings up many questions, the biggest one that remains is “How can an entire food court be wiped away without the consultation of those who it affects?” Where was the student opinion or the Student Government Association or the Board of Regents? Surely a decision that affects an entire campus must have been one where as much input as possible was involved.

When asked who was consulted while making the decision, Meszaros said, “We talked with the businesses on South Campus.”

Yet the business owners aren’t the ones who are eating or buying lunch at South Campus. The students and faculty are.

Yes, money is a huge factor in any running service, but when the people in charge begin to make decisions based off money and not who will be affected, then there is a problem.

Serving students who pay for meal plans, Dining Dollars and Big Red Dollars should be the top priority.

If students on South Campus now want to eat, they can go to the bookstore, which has grab-and-go salads and sandwiches. But the bookstore closes at 1:30 p.m. on weekdays and isn’t open at all on Fridays.

They also can go to neighboring Manpuku Japanese Steakhouse & Sushi Bar Restaurant (which does not take Big Red Dollars) or take a risk and attempt to cross the busy intersection that separates the campus from other restaurants.

Again, how is this convenient, and for whom?

Students can also travel back to main campus to eat, but anyone who eats lunch on main campus knows the lunch-hour rush is a long wait.

The Herald has already written about the long lines at the Topper Cafe and Subway.

With RedZone and Panda Express still not open four weeks into the semester, options are limited, and traveling to main campus to eat will most likely be just as troublesome as trying to go to the restaurants surrounding South Campus.

We have heard officials say that South Campus is just as much as WKU as main campus is, but it is evident that the decision to close the food court was handled differently than if it was on main campus.

If the business that served food on South Campus weren’t making enough money, then they should have thought of new ways to bring students in — not wipe out the entire food court.

One thing they could have done is switch the restaurants out with new ones.  Isn’t that what happened with Taco’s Last Stand two semesters ago on main campus? It didn’t bring in enough business, so it was replaced with Greens to Go. Why could the same decision or a similar one not be made on South Campus?

Students spend money to buy meal plans so they can eat. The fact that South Campus students are now having to pay out of pocket  for a meal, eat cold-cut sandwiches or, worse, not eat, should raise the eyebrows of many, especially when students pay up to $1,575 a semester for meal plans that allow them to eat whenever they want — whether that be at main or South.

What is important to remember is that the closing of the South Campus food court is in “experimental mode,” meaning the changes are not permanent.

Students, from both campuses, the Herald urges you to write, call or email those who are in charge of these decisions. While they should have consulted with the students beforehand, now is the time to reach out.

The decision to close the South Campus food court should not be taken lightly. Though officials say they made the decision out of the best interests of the students who attend South Campus, the hassle it is now causing them doesn’t seem as if they were considered.