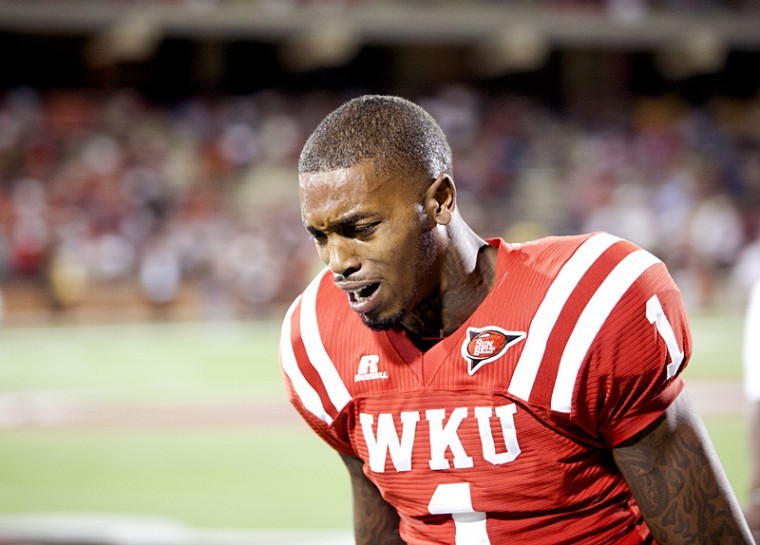 Sophomore Jonathan Dowling reacts to being ejected from from Saturday's game against Southern Miss for a hit on a Southern Miss receiver in the end zone in the third quarter. The Toppers won 42-17 in front of a sold-out stadium.

WKU has lost its appeal to the Sun Belt Conference to let Jonathan Dowling play this week.

The Sun Belt rejected WKU’s appeal of the one-game suspension levied on Dowling, a sophomore safety, in the wake of his ejection from WKU’s win last Saturday against Southern Mississippi, the league ruled on Tuesday.

Senior Kareem Peterson will start in his place.

Dowling was ejected from the Southern Miss game after a late, helmet-to-helmet hit on a Southern Mississippi wide receiver.

Tyre Bracken caught the ball and stepped into the end zone when Dowling, playing deep in the end zone, hit him in the helmet with his helmet and knocked Bracken to the ground.

Bracken was slow to get up and walk off of the field and Dowling was ejected from the game.

The Sun Belt has a rule that any player ejected from a game must sit out their next game.

Coach Willie Taggart initially said after the USM game that he had a conversation with Sun Belt commissioner Karl Benson, who was at the game, that led him to believe Dowling would be ruled eligible. He later stated that the team was moving on as if the safety would not be eligible.

Dowling has an NCAA-best four interceptions and 18 tackles, ranking fourth on the team.

Peterson, his replacement in the starting role, has 148 career tackles and four career interceptions.

Taggart said with or without Dowling, the Topper defense will show up on Saturday.

“We have a big-time ballgame and we’ve got to move on with or without Jonathan,” he said. “We feel really good about Kareem Peterson — he’s plenty good enough. We’re moving on.”