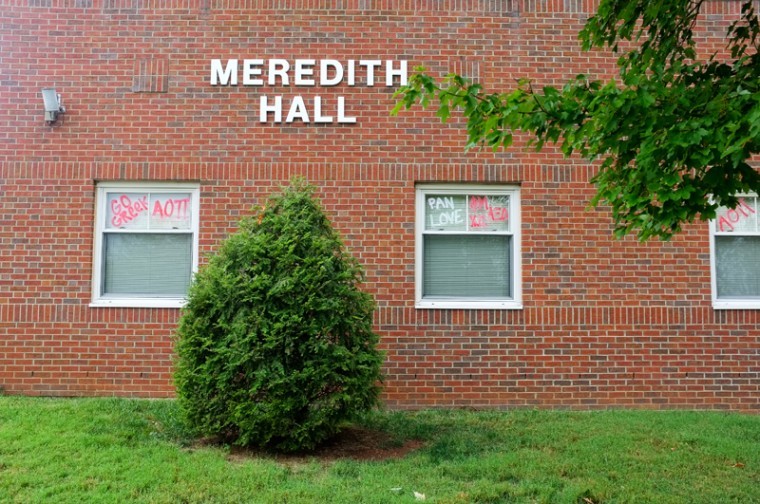 After a two-year gap Meredith Hall is back to being an all-sorority dorm.

Meredith opened in 1992 with the intention of being WKU’s sorority hall. When Alpha Delta Pi sorority moved out in 2010 because of the opening of their new house, there was a two-year time period in which a floor of Meredith was filled by non-sorority members.

Nina Davis, a junior and member of AOPi, has lived in Meredith Hall for three semesters. “My favorite part of living here is being able to live with all my sorority sisters and knowing everyone on my floor,” Davis said.

Davis also explained that there is a study room on the AOPi floor that allows the girls to study together.

The dorm rooms in Meredith Hall are set up in a suite style in which two rooms are conjoined by a bathroom. Each room is the home of two girls.

Kateiri Kintz, a member of Omega Phi Alpha sorority, is a resident assistant in Meredith Hall this semester.

“Each sorority leases a floor, but members of each sorority can pull in someone who is not affiliated with that sorority to live on the floor,” Kintz explained.

This can mean the person is not a member of a sorority at all or just affiliated with a different sorority than the one leasing the floor. Each girl living in Meredith Hall must have fulfilled at least twelve credit hours and be approved by the housing manager to live there.

Kintz said her favorite part of living in the hall is seeing the differences in her dorm mates.

“Living in Meredith gave me the opportunity to see the different facets of each of our residents by getting to know them and seeing how they interact with one another,” Kintz said.

Ashley Turner, a member of the coed honors fraternity Phi Sigma Pi, likes living in Meredith because as an RA she gets to plan various dorm events. “Dorm events are something the girls can do to build community,” Turner said.