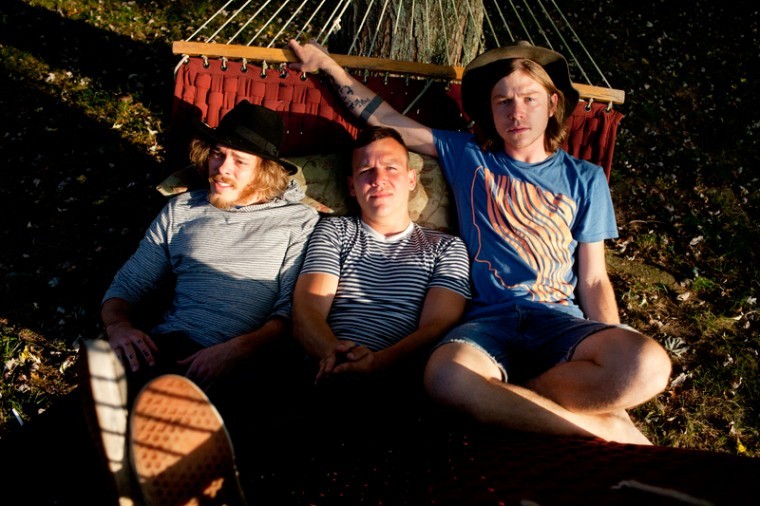 Left to right, Jared Champion, Brad Shultz and Matt Shultz, of Cage the Elephant, sit on a hammock at Champion’s mother’s house in Bowling Green last Friday. They had band practice at the house for 12 years and will be working on their upcoming album at a new band house in Portland, Tenn.

Since they made it big in the music industry, the members of Bowling Green’s Cage the Elephant haven’t forgotten their roots.

Even though their careers have taken them across the U.S. and abroad, the five-piece band, known for their raucous live concerts, has maintained a close relationship with the local music scene.

For lead vocalist Matt Shultz, his city is a unique place for the arts.

“It seems to be a kind of petri dish for rapid growth,” he said.

Brad said Bowling Green’s small-town atmosphere provides closeness between artists and students, who come into the area for WKU to provide fresh talent.

Through the years, Cage the Elephant has remained a part of this community, and they’re back this year to help put on Starry Nights Music & Arts Festival on Sept. 28 and 29.

“This is a community that has given us so much,” Matt said.

The festival has been a place for local bands and artists to come together since 2008, forming an important part of Bowling Green’s music culture. In 2010, Starry Nights featured more than 25 bands.

After curating the festival in past years, Brad said the band decided to wait a year in order to reorganize and make this year’s festival better.

“We didn’t want to make the mistake of rushing and putting something on that could potentially alter this year,” he said. “We wanted to take time to make it as special as we wanted it to be.”

This year, there are considerably fewer bands, which helps to keep the cost down.

“We’re not in this to make a shitload of money,” Brad said. “That’s why tickets are 45 bucks.”

Instead, Cage the Elephant is focusing on the festival experience with a line-up of bands known for their live performances.

Sleeper Agent, Morning Teleportation, Manchester Orchestra and Space Capone will be among them. More than 10 other bands are set to perform as well.

Aside from the two nights full of live music, festival-goers will also be able to chow down on food from Bowling Green and Nashville vendors, relax in hammocks on the property and compete in a campsite decorating contest. The two-day fest will be at Ballance Farms, 13101 Louisville Road, Oakland, Ky.

Starry Nights will also host a festival-wide game of capture the flag, providing a pancake breakfast and setting up a glow-in-the-dark disc golf course.

“It’s based around music, and we think music is a big way to bring people together,” Brad said. “But people bond over a lot of different things.”

Their goal: a fun, chill festival that showcases music, food and art and brings the community together without the corporate hang-ups that tend to plague other festivals.

Brad said achieving this balance was the most stressful thing about planning Starry Nights and will probably be an issue that they’ll deal with for years to come.

Whatever lies ahead for the event, Cage the Elephant assures that this year will be awesome.

For those new to the festival, Brad said the weekend will be a welcoming of sorts.

“Expect something that will give you a sense of community,” he said.

To the people who have already been to Starry Nights: get ready.