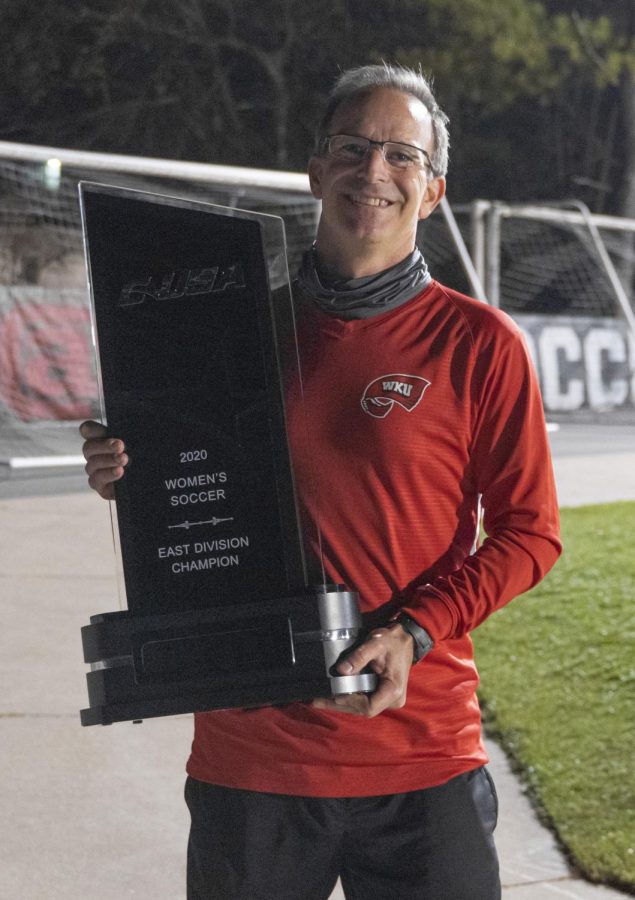 The Lady Toppers clinched the Conference USA East Division pulling out a 1-0 win over Charlotte. The 49ers entered the game one point ahead of WKU in the standings.

“The Championship hasn’t even sunk in with me yet,” head coach Jason Neidell said. “One of my messages to the team was this is a defining moment for our team and they lived the moment tonight.”

Erwin stated that there was extra sense of urgency to finish the game for junior Ambere Barnett after she went down 15 seconds into the second half with an apparent lower body injury.

WKU applied pressure early on two putting shots on net within the first 15 minutes of the match.

Sophomore Julia Patrum provided Charlotte’s first scoring chance and was stopped by Kobylinski’s diving save at the 20 minute mark.

Kobylinski went on to post her fourth shutout of the season over the 49ers.

Then five minutes later, the Lady Toppers were outshooting Charlotte 3-1 with shots on goal and 7-2 on total shot attempts.

Both teams played hard on defense in the first half, but Charlotte struggled to put pressure on the Lady Toppers goal. WKU led in shots on goal 4-1, attempted shots 10-3, and corner kicks 6-0. Charlotte led in saves 4-1.

“I think coming out at halftime, I didn’t feel happy with how I was playing and just coming out and battling for everything until the last second.” Irwin said. “We wanted to stick together as a team down to the last second. Knowing that we had to get a way out of this made it feel even more special that everyone kept playing to the very end.”

Four minutes into the second half, the Lady Toppers came close to scoring off a corner kick.

Neidell said he challenged the forwards tonight to get the ball in Charlotte’s end in the first half.

In the second half WKU started to see the fruits of their offensive labor.

One of the biggest scoring attempts came at the 40 minute mark with Stapleton leaving the box, but the shot went far right of the goal.

Jacobsen’s deep shot at the 57th minute was high pointed by Stapleton for the save. That gave her five on the night.

Charlotte continued to do better at putting pressure on the Lady Toppers in the second half. Patrum’s header at the 65th minute was wide right of the goal.

The Lady Toppers stayed on top of shots on goal with 7-2 and attempted shots 16-6 by the 73rd minute.

WKU broke through with 40 seconds remaining in the match as sophomore Katie Erwin scored the game winning goal to clinch the C-USA East Division.

“We pride ourselves on our forwards being aggressive players,” Neidell said.

Neidell said he didn’t have an update on Barnett following the win over the 49ers.

WKU will play the fourth place team from the C-USA West Division to begin the postseason.

“It’s either going to be UAB or UTEP,” Neidell said. “The UAB versus La Tech game was postponed until tomorrow morning so we don’t know who we’re preparing for.”

The following day WKU was slated to open the C-USA Tournament against Alabama-Birmingham in the quarterfinals.

The match is set for April 13 at 11 a.m. in Houston, Texas. Rice is the host of the 2021 spring C-USA Tournament. All matches are scheduled to be broadcasted on ESPN+.

If WKU is to defeat UAB then the Lady Toppers will play either Charlotte or North Texas on April 15 at 4:30 p.m.