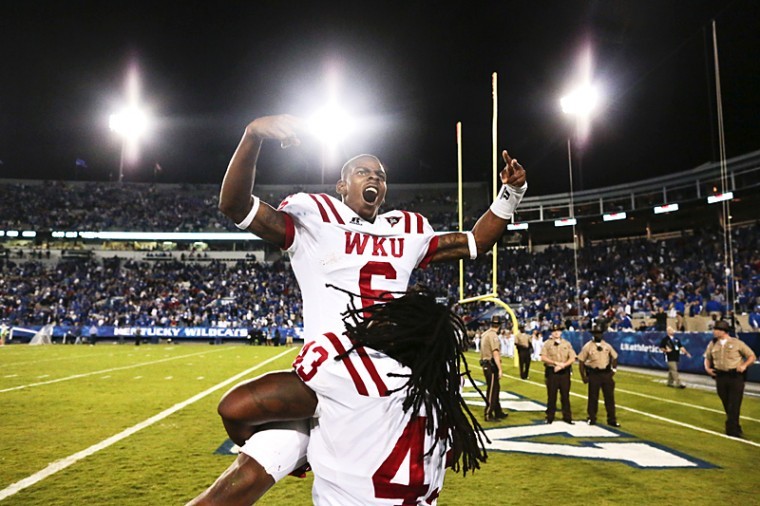 Toppers quarterback Kawaun Jakes (6) is congratulated by his teammate  defensive lineman Jamarcus Allen (43) after winning the game after the WKU vs. Kentucky Wildcats football game in Lexington on Saturday, Sept. 15. The Toppers won in overtime 32-31.

LEXINGTON — It was a play that’s destined to go down in WKU lore.

With the game on the line, senior quarterback Kawaun Jakes takes the snap, tosses it to junior running back Antonio Andrews.

The running back holds it, then throws it back to Jakes, who, thanks to a block by sophomore wide receiver Willie McNeal, breaks into the end zone for the deciding two-point conversion.

The Toppers could have kicked the extra point and kept the game going into another extra period, but win, lose or draw, Taggart was determined to wrap the 32-31 win over Kentucky up in one overtime.

“I told our guys, ‘if we score, we’re going to go for it all,” he said after the game. “’We’re playing to win, we’re not going to another overtime.’”

He said the call for the trick play wasn’t his idea alone.

“Our guys had been calling for that play all game,” the coach said. “We had said once we get to the four-yard line we’re going to call it but I didn’t get to call it.

“Our guys wanted that play, so I told them, ‘here’s the play, now do something with it, and they did.”

The win brings Taggart’s overtime record up to 4-0 in his three years at WKU.

He said that winning record gave his team confidence with the game on the line.

“When we did go to overtime, I brought our team together and I was like, “hey, this is what we do. We’re the overtime king – whenever we go to overtime, we win,” Taggart said. “Our guys were fired up, they understood we were back in our neck of the woods being in overtime, and they went out and played well.”

Dowling lights up for WKU defense

Sophomore safety Jonathan Dowling showed why he was an SEC player against an SEC team on Saturday.

Smith had not thrown an interception in the previous two games he had started this season.

Dowling, who now has four interceptions this season, said he and the rest of the Topper secondary were looking for a big comeback performance after getting torched by Alabama last weekend.

“There were a couple of plays at ‘Bama where we blew some coverages and things could have went a different way if we were in the right spot so all week we just paid attention to our keys and we did everything that we had to do today,” Dowling said after the game on Saturday.

Dowling’s SEC background also loomed large over his performance. The former four-star recruit played a year at Florida, an SEC school, before transferring to WKU two years ago. He sat out last season.

The safety said he knows he has to make plays to live up to his SEC reputation.

“When I play an SEC school or any other school I feel like I’ve got to make a play,” he said. “With the defense playing as hard as it did, with the d-line getting a great rush and linebackers covering their people, they just put me in the right place to make a play.”

At times on Saturday, the entire WKU team was riding on the back of Andrews.

The junior running back had career-highs in rushing yards (125), touchdowns (three), and all-purpose yards (233).

Andrews, a former Kentucky Mr. Football winner in high school, even made plays with his arm — he lofted the last pass of the game to Jakes, who took it in for the score on the last play of the game.

He was bound to get the majority of the carries for WKU, as junior running back Keshawn Simpson, who started for WKU in the first game of the season against Austin Peay, was out with an injury.

Taggart likened Andrews’ role for WKU as similar to that of former USC and current Miami Dolphins running back Reggie Bush as a quick, all-purpose back.

“I made a statement earlier in the year that he could be our Reggie Bush and that’s what he’s doing for us, doing things that Reggie did for those guys back then,” Taggart said.

Jakes has seen a lot of losses under center for the Toppers, but tonight he did something no other WKU quarterback has done — beat an SEC school.

He put up respectable numbers on the way to the win, going 16-for-22 for 160 yards, one touchdown, and an interception that was tipped and mishandled by the receiver.

He also made plays with his feet, scrambling out of the pocket to make the play several times.

His most significant scramble came in the overtime period. Facing 2nd and 10 at the 25-yard line, Jakes broke a blitzing defender and ran for nine yards, getting the Toppers into the red zone and making something out of what was essentially a broken play.

Taggart said Jakes, who has taken a lot of criticism for WKU’s struggles the past three seasons, deserves nothing but praise for his work this year.

“I tell you what, I can’t be more proud of a kid than I am with Kawaun and everything he’s been through in this whole struggle with our program and taking most of the blame for our struggles,” Taggart said. “He came in this offseason and he put in the work. He put in so much work this offseason and made his teammates accountable to help him become better.”

Jakes didn’t have much to say after the game (other than repeating the phrase, “we play to win”), but he did say he was pleased with being able to score such a big victory in his last year at WKU.

“This being my senior year, to beat UK, that’s a blessing right there,” Jakes said.