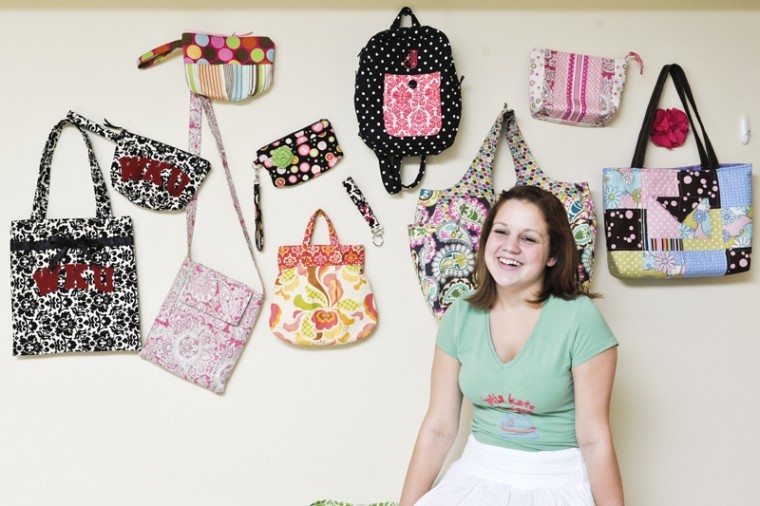 Senior Julia Weis, a child studies major, has been interested in creating her own apparel since she was 7. "I remember I used to get my barbies and I wasn't happy with the clothes they had. So I made my own," Weis said.

In two days, New York Fashion Week will be in full swing and well-known fashion designers will present the upcoming spring/summer collections. Meanwhile at WKU, a new handbag designer is coming to prominence.

If you see girls on campus carrying voluminous tote bags, initialed wristlets, colorful messenger bags or drinking water from bright, personalized cups, it might not be Vera Bradley.

There’s a good chance those items are designed and made by Louisville senior Julia Katherine Weis.

Weis, who majors in child studies, started JuliaKateDesigns at the end of May 2012, right after putting in her two weeks’ notice at Sweet CeCe’s.

In less than four months, her designs have become popular nationally, and her success has skyrocketed.

“I have customers from here to New Orleans, to New York City, to wherever in between,” Weis said. “It is really spread through Facebook and word of mouth. It is crazy.”

Weis remembers her mom and grandmother sewing when she was a child. Like a lot of kids she said, she wanted to do what her mom did.

“I started out by putting fabrics together with tape and staples,” Weis said. “And my mom said, ‘Oh, no! Let me show you how to actually sew.’ And I just went from there.”

The process of creating bags is one of those things that set her apart from other designers. Weis said her customers are usually involved in making their own original bags from picking out design, color and even fabric.

“My motto is: ‘You dream it. I create it. Others envy it,’” Weis said. “I have certain bags that I make a lot, but people come to me when they want something custom-made too.”

Bowling Green junior Morgan Sowders recently purchased a zebra-print messenger bag from Weis and said she is very satisfied with it.

“I love the quality,” Sowders said. “It is thick, and it is very well made. She [Weis] loves what she does, and she makes things the way consumer wants them to be made.”

Butler County sophomore Maggie Smith said she has bought a couple of things from JuliaKateDesigns, too. She agreed with Sowders and added that she enjoyed participating in the creating process.

“She [Weis] is so nice and helpful with everything,” Smith said. “She takes her time so I know that it is great quality, not just thrown together for money. I feel like she is so talented.”

Along with the promise that her bags won’t fall apart, Weis said she offers them at a good price, which varies from $7 to $70.

“My goal is to keep my bags affordable,” she said. “I know we are all college students here, and we don’t have a lot of spare money.”

Weis said she also makes a give-away every month to attract new customers.

Although she is working and expanding her business, Weis said she is not planning to make a living with designing. She hopes to open her store one day, but her true love is kids, and she wants to work with them in the medical field.

“I don’t have big dreams like ‘make it in New York’ or ‘make it in LA,’” Weis said. “I just want people to love my bags and have fun with them.”