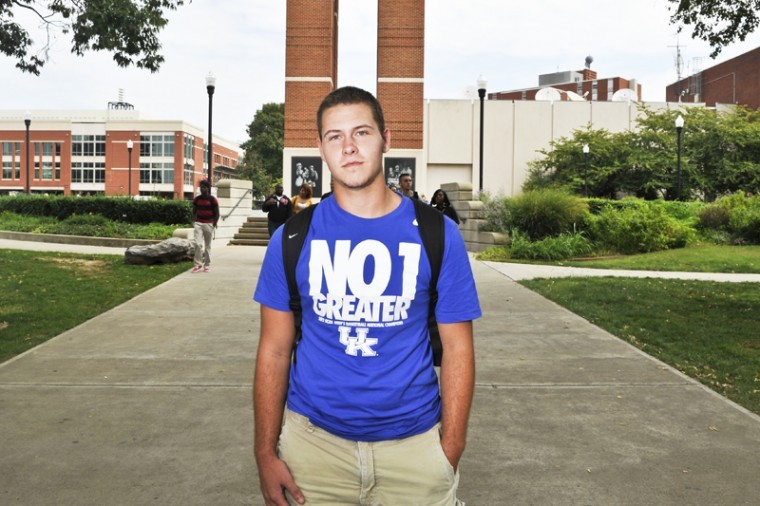 Blake Holley, WKU freshmen from Bowling Green, is a UK fan. "They're (UK) not very good at football," said Holley. "Been a UK fan all my life," "I believe that they will (WKU) beat them (UK.)" said Holley. WKU plays UK football team on Saturday Sept. 15, 2012 at University of Kentucky.

Saturday’s WKU-Kentucky matchup has brewed a campus conflict this week as to who some WKU students will be cheering for.

The issue was brought up on Monday when coach Willie Taggart criticized students who go to WKU but cheer for the Wildcats.

“That makes no sense at all,” Taggart said.

More than 80 percent of WKU students hail from the Commonwealth, according to WKU’s 2011 Fact Book.

The prominence of UK sports, especially men’s basketball, throughout the Commonwealth means many of those in-state WKU students grew up cheering for the Big Blue.

So on Saturday a large group of WKU students must choose between the school they attend and the school for which they grew up cheering.

Owensboro junior Dylan Evans will be at Commonwealth Stadium on Saturday pulling for the home team.

Elizabethtown sophomore Regan Ates will be doing the same.

“I’ll be in Lexington cheering for Kentucky and wearing my blue, even though the outcome may not be best,” Ates said. “I could see Western winning.”

Ates also said she wouldn’t be upset if WKU beat the Wildcats, but would never pull for WKU over UK in sports.

She also said that she got into UK, but chose to attend WKU instead.

“I like Western, but I didn’t come here because I’m a Western fan,” Ates said. “I like the campus better and my sister lives down here and I still have family down here. I didn’t have that in Lexington.”

Evans, a transfer student from UK, said he chose to transfer to WKU because it was closer to home and had a good broadcasting program.

He said this could be the year WKU gets its first win over UK.

“I feel like Western has a good chance to beat UK this year,” Evans said. “With their strong finish last year and the experience of playing Alabama last week, I think they’ll have the confidence to challenge another SEC team in Kentucky and have a chance to win.”

Another transfer student, Evansville senior Jeff Locher, began his college career at WKU, transferred to UK for his junior year and is now back at WKU to finish school.

Locher cheers for the Wildcats in basketball, but said he’ll be supporting the Toppers on Saturday.

“When I moved here as a freshman, WKU had just recently moved up as a (Football Bowl Subdivision) team,” Locher said. “Every year they have progressively gotten better, and I feel like I’ve watched them grow up.”

The trend of WKU students walking around campus wearing blue may change if the Toppers win this Saturday, he said.

“They are going to be really embarrassed whenever we beat UK, especially with them being an SEC team,” Locher said. “I think those people will be the ones to be more proud to wear WKU red later on.”