Before I Was: Yellowstone shaped professor’s childhood 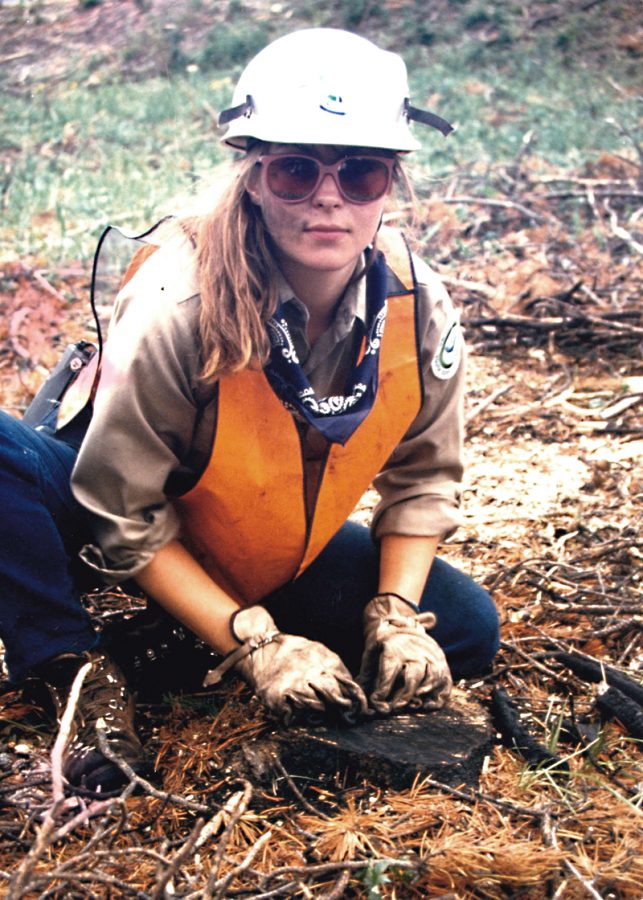 Susann Davis works to remove debris from the side of the road in Yellowstone National Park the summer following the 1989 forest fires.

WKU Spanish professor Susann Davis was well aware that a bear once ate a woman in Yellowstone Park.

The possibility of death loomed, but that didn’t stop Davis from wanting to work in the park.

Several years later, Davis was the first person to lead a crew on an overnight trip into Pelican Valley, where the woman had been killed.

Both of Davis’ parents worked for the National Park Service, and as a child she moved from park to park every few years. After living at nearly a half-dozen parks, Davis could be described as a “national park brat.”

Davis applied for the Youth Conservation Corps (YCC) at 17 and was selected, along with 40 other teens, through a lottery system. She spent eight weeks of the summer doing physical labor to improve and maintain the park. But in 1988, the funding for the program ran out.

“Although it was unfortunate, it was sort of a blessing in disguise,” Davis said. “1988 was the year of the fires — fires like no one had ever seen — and they needed the quarters to house the firefighters.”

The blaze reached to the top of a nearby mountain, and the sky filled with purple clouds of smoke as she, her family and the park officials were forced to evacuate.

After the fires ended in 1989, the Loyal Order of Moose re-funded the YCC program. Davis was asked to return the next year as crew leader.

Davis described her job as being like that of a resident assistant. Her responsibilities to her crew were 24/7, especially when they were in “bear country,” she said.

With five years of experience working at Yellowstone, Davis has an arsenal of once-in-a-lifetime experience stories.

While traveling to a spike camp across Yellowstone Lake, she and her team saw a grizzly bear swimming in the water. Davis’ eyewitness account of the bear ended years of debate about whether bears were capable of swimming across the frigid waters.

In addition to being dangerous, living and working in the park was also sacred for Davis.

“My spirituality is very tied to my experiences in Yellowstone and in other national parks,” she said. “It was there that I learned ‘leadership by fire.’”

Davis put her lessons to good use when she became a Spanish professor at WKU in 1998. She has a master’s in hispanic studies from Auburn University.

One student who found Davis to be an influential professor was Owensboro senior J.P. Stovall.

“I have three majors and I specifically kept Ms. Davis as my advisor because of her dedication to helping students outside of the classroom in their college track,” he said. “Over the last four years, she has become more of a friend than an advisor.”

“She is an incredible teacher and mother, and she balances both jobs very well,” Angle said. “Susann’s students walk away from her class at the end of the semester having learned more from her than just Spanish.”

Davis was given the Potter College Teaching Award in Spring 2012.

Today, she pulls from her experiences at Yellowstone to encourage students to seek opportunities that will challenge them.

“Any time you have the opportunity to step outside your normal life, whether it’s working at Yellowstone or studying abroad, there will be personal growth,” she said. “That growth will benefit you in any career. The broader your education, the better off you are.”