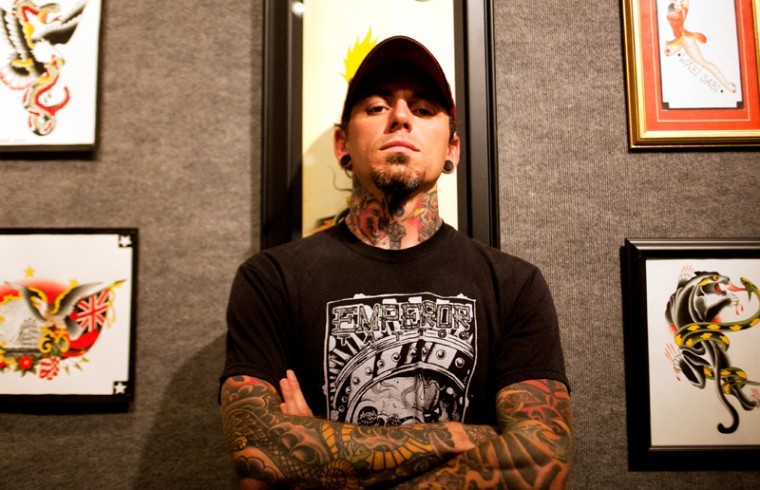 Brad Ausbrooks, 34, of Bowling Green has been a tattoo artist for 10 years and currently works at Carter's Tattoo. Ausbrooks' work is featured in the gallery show in FAC.

Some people may not consider tattoos a work of art, but the fine arts center gallery is putting ink on display.

The artists on display, Wes Carter, Brad Ausbrooks, Atom Compton, Wesley Sandlin, Jerrad “Doughboy” Derossett and Robert Gregory, come from Carter’s Tattoo Company and designed all of the art in the gallery.

Brent Oglesbee, head of the art department, said that the gallery committee decided last spring that the exhibit would be a part of the gallery schedule.

“The gallery committee felt that this was an interesting extension of how the visual arts are being used,” Oglesbee said.

This exhibition was installed by Kristina Arnold’s gallery studies class.

Arnold, the gallery director and an associate art professor, said the exhibition was the brain child of art professor Matthew Tullis.

“He knows the folks at Carter’s Tattoo Company and Brad Ausbrooks was a former student of his,” Arnold said.

Arnold said while she and her students were hanging the art, students would show their own tattoos from Carter’s to each other.

“We wanted it to be something that would resonate with students and they would find it applicable to their lives,” Arnold said. “More than looking at and expanding the definition of what art is.”

She said the tattoo artists make work that is permanent on the skin, but when they showed their work at the exhibit, they were much shyer.

“These artists are local, but you’re not used to seeing these images from them; you’re used to seeing their skin art,” Arnold said. “(It’s) A selection of images you might expect to see in a tattoo show, and then some are unexpected.”

Ausbrooks said he has 10 years of tattoo experience.

“I hope that students get a different perspective, because it goes beyond looking at it, to see our influences and styles we like to do and show that it’s actual art,” Ausbrooks said of his work.

Ausbrooks said that he had fun doing old flash art, such as anchors or barbed wire from the ’30s and ’40s and giving it a modern feel.

“Tattoo art is taking old ideas and putting a twist on it,” Ausbrooks said.

Students roaming the gallery reacted positively to the exhibit.

Alexandria junior Rachael Fusting said she thought the exhibit was brilliant and interesting.

“Ten years ago, tattoos were taboo —now it’s a self-expression art, and this exhibit embraces where art is going in society,” Fusting said.

“The designs were visually striking, and I like tattoo art in a fine arts setting,” Reed said.

There will be a reception for the exhibition on Thursday at 6 p.m. At least two of the artists will be there to briefly introduce their work and answer questions in the gallery.