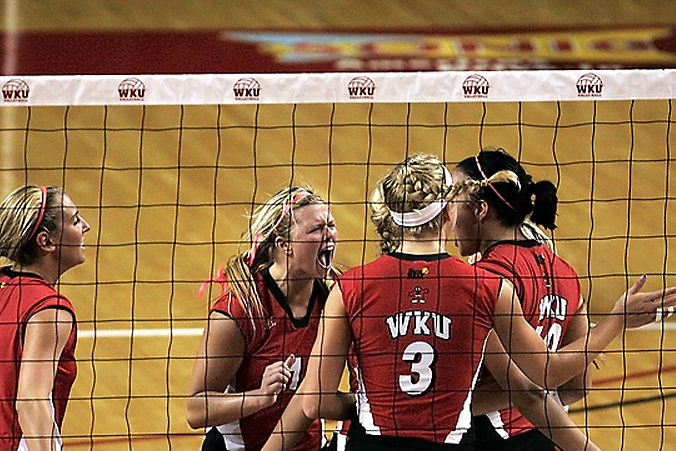 Even though the Lady Toppers shut out Lipscomb, it was no easy effort from WKU, as the team suffered through the simple fundamentals, coach Travis Hudson said.

“Lipscomb is a team that is just going to keep coming and I knew they would be in it, but you certainly have to finish it when you have the opportunity.”

The Lady Toppers now sit at 10-3 on the season before heading to Ann Arbor, Mich., this weekend to take on Duke, Michigan, and Eastern Michigan.

Reigning Sun Belt Conference Player of the Week Paige Wessel said the team is in a good spot at this point in the year.

“It’s exactly where we want to be,” Wessel said. “We still have a lot of work to do.

“We have a couple of more preseason games we want to get good wins on, so we’re working toward that.”

With WKU leading 7-6 in the first set, kills from Heather Boyan, Noelle Langenkamp and Jordyn Skinner helped rally the Lady Toppers to a 6-0 run to stretch the lead to 13-6.

A 4-0 run from Lipscomb later in the set gave the Lady Toppers some trouble, but WKU pulled out a 25-20 first set win.

Sophomore defensive specialist Mollie Pajakowski saw her first action of the season on the court tonight.

“She’s able to come in and play in a serving role,” Hudson said. “She’s a terrific server. It’s a good thing to see her finally back out on the court.”

The tight battle continued into the second set.

WKU and Lipscomb were neck and neck in the middle of the set, with the Lady Toppers holding onto a 15-14 lead.

The Lady Bisons rallied back within one at 21-20 before another WKU scoring spree sent the Lady Toppers to the locker room with a 25-20 set win and a 2-0 lead in the match.

Junior Janee’ Diggins suffered a severe ankle sprain coming down from a block at the net.

She left the game after posting three kills on six attempts and one block.

Diggins is “highly doubtful for the weekend” Hudson said.

Haley Bodway seems to be the top candidate to fill in Diggins’ starting role, as she accounted six kills on 10 attempts and four blocks.

“Haley Bodway stepped in and did a great job tonight,” Hudson said. “She is a very, very good player.

“We’re fortunate to have the kind of depth that will allow us to bring somebody like her in.”

Bodway said she just stepped into her role as usual to help her teammates.

“I knew I had to help out my team and just do what I do,” Bodway said.

Like they have in more recent matches in Diddle, the Lady Toppers came out of halftime on fire.

WKU forced a Lady Bisons timeout after jumping out to an early 6-1 lead. The Lady Topper displayed a defensive clinic in the final set with 13 digs and seven blocks while holding Lipscomb to a negative hitting percentage.

All of that helped WKU close the frame with a 25-11 win, and a 3-0 shut-out of the Lady Bisons, their seventh sweep of the regular season.

Next up for the Lady Toppers is another long road trip up to Ann Arbor, Mich., for the Coke/Michigan Invitational.

WKU will take on Duke Friday at noon, and Michigan at 6:30 p.m. Saturday the Lady Toppers will face Eastern Michigan at 3:00 p.m.

This is the last non-conference tournament for WKU before conference play begins. Hudson said the challenge will be bigger now with the injury of Diggins.

“It’s going to be a bigger challenge now with Janee’ likely out of the mix,” Hudson said.  “We’re playing two more teams that are known and recognized nationally.

“We feel like it’s a tournament that we can compete in and we’re looking forward to it.”