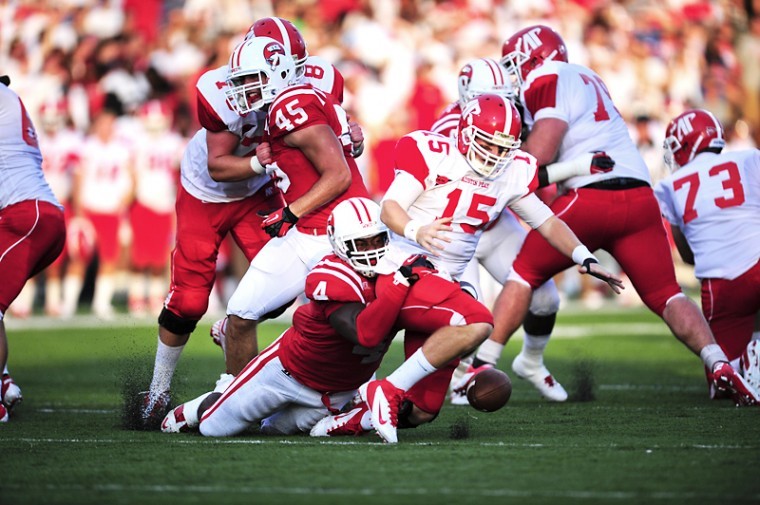 A lot of offensive numbers from WKU’s season opener Saturday against Austin Peay stuck out, including 296 passing yards for senior quarterback Kawaun Jakes, touchdown passes to four different targets and 35 points in the first half.

But the most notable offensive number might have come from the Governors, as Austin Peay had a grand total of 11 passing yards.

Junior linebacker Andrew Jackson had an additional six, along with a sack and a forced fumble.

Redshirt freshman defensive lineman Gavin Rocker, who recovered the fumble, added three tackles, two of which were for a loss.

Sophomore safety Jonathan Dowling, who had seven tackles and one interception, said the Topper secondary had the benefit of playing with a strong defensive line.

“Our d-line, with the pressure that they were getting, it’s a lot easier to cover people and get up on the side,” Dowling said. “Just the fact that we’re a lot faster than people helped us out.”

Coach Willie Taggart said he was pleased with the win but saw a lot of room for improvement from his defense.

“We’ve got to do a better job of tackling,” he said. “I wasn’t really happy with our tackling at all. They shouldn’t have had that many yards.”

Despite his disappointment, Taggart said he thinks his defense can make strides in improvement this week.

“They always say you make your most improvement from Game 1 to Game 2 and we’re looking to see if we can improve in tackling come next game,” Taggart said.

Taggart glad to start the year with a win

Saturday’s game buried another streak of which the Toppers might not have been too proud.

The win over Austin Peay marked the first time since 2005 WKU has started off the season with a win.

The Toppers were still a Football Championship Subdivision school when they last opened the year with a win. They started to make the jump to the Football Bowl Subdivision in 2007.

“It feels good to come out here and start the season out 1-0,” Andrews said. “I wasn’t here before, but we’re going to start a winning tradition here, and what better way than to start off 1-0?”

Andrews makes impact across the board

Antonio Andrews might not be the guy at the top of the running back depth chart, but a good amount of the Topper offense runs through him.

The running back, who used to be listed on the roster as just “athlete,” had a total of 228 all-purpose yards. He had 39 rushing yards, 59 receiving yards, 54 kick return yards, and 76 punt return yards. He also had a first quarter touchdown off of a punt return.

Andrews is a part of a “running back by committee” in the wake of the departure of Bobby Rainey to the NFL, and while his rushing yards ranked third on the team, Andrews had as much playing time on offense as any of the other backs used on Saturday.

When the WKU offense exploded for 35 points in the first half on Saturday, Taggart got the opportunity to let some of his starters rest and explore the depth on his roster.

The Toppers explored their options at running back by giving freshmen Leon Allen and Marquis Sumler playing time in the second half.

Sumler finished with 32 yards in five carries while Allen had a touchdown and 93 yards in 13 carries.

WKU also gave time to its backup quarterbacks after Jakes finished his strong first half. Redshirt freshman James Mauro completed two of three passes for 56 yards, while sophomore Brandon Doughty was incomplete in the only pass he threw.

The coach was pleased with the results.

“It was good that James and Brandon both got in and were able to play,” Taggart said. “It’s not often that you get the chance to get your backup quarterback in and get him some reps early in the season and that was good that he was able to get some game repetition.”

Junior running back Keshawn Simpson left the game early because of a “banged-up knee,” Taggart said. Taggart said his status would be determined later in the night.

Taggart is now 10-15 in his WKU head coaching career.

Jakes is now 10-22 in his career as WKU’s starting quarterback. Jakes’ four touchdown passes were the most for a Topper quarterback since Jeff Cessarone threw five against Akron in 1985.

Andrews’ punt return touchdown was the first for WKU since Curtis Hamilton recorded one against Morehead State in 2007.