EDITORIAL: It’s time for Topper fans to show up 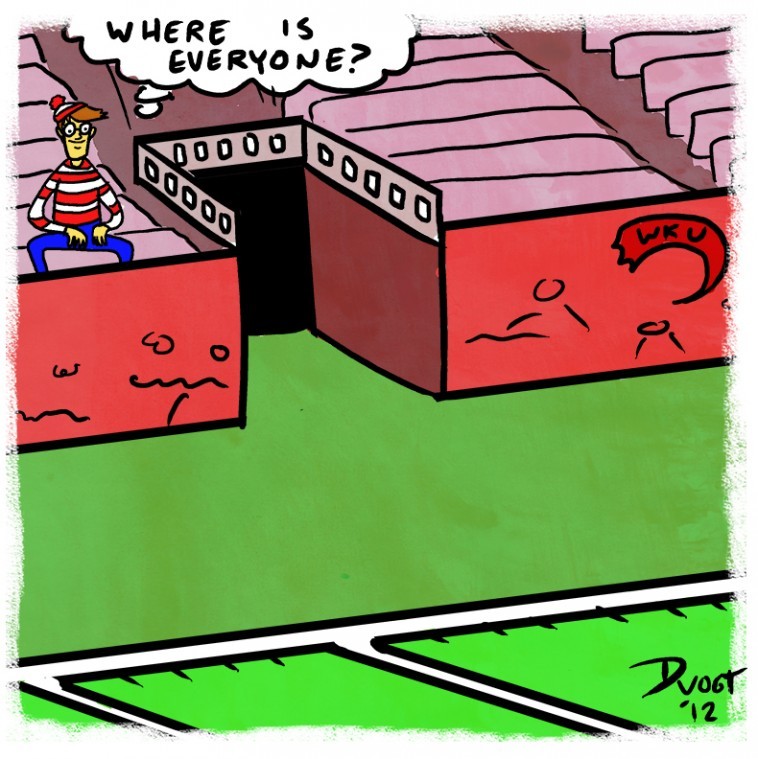 THE ISSUE: Coming off an impressive 7-5 season, this past Saturday, WKU’s football team put on a dominating performance, defeating Football Championship Subdivision school Austin Peay 49-10. However, only 16,327 fans were in attendance to watch the Toppers’ first home win of the season.

OUR STANCE: Plain and simple, there should have been more people at the game. WKU ended last season bowl-eligible but was not invited to play in the post-season, with many speculating our lowly home attendance was a factor. It’s time for students to show up and support their team.

Last season, WKU, at 7-5, was one of two bowl eligible teams in the nation and the only team with a winning record to be left out of a bowl game. We finished 7-1 in our conference — good enough for second place, but not good enough for an automatic bowl game or an invite.

It was cited by then-athletics director Ross Bjork that one of the reasons WKU didn’t get the bowl bid was poor attendance WKU averaged during the season.

The 16,327 that came out on Saturday is not nearly enough for what is needed to prove to a bowl committee that the Toppers deserve an invite.

The reason being, a bowl committee looks to make money from their game. One of the ways to gauge that is by looking at the home attendance record of the teams they may invite — and WKU’s attendance was the third lowest among bowl-eligible teams. Not an enticing statistic for those looking to make money.

It must be taken into consideration that there was rain forecasted throughout Saturday as well as it being Labor Day weekend. Yet, at the end of the day, those are excuses.

The rain ultimately held off throughout the game, and considering students began to arrive on campus a little more than a week ago, it’s a bit early to be heading home for the weekend.

The fact of the matter is that we have a surging football team with a promising season, and the students who attend the school will not show up to support them. Bowl committees want to know that the team they invite has fans who will purchase tickets.

Why invite a team whose fans won’t even attend home games?

The excuses are starting to sound like old news. Gone are the days where WKU was on season-long losing streaks and getting blown out by other schools. They are starting to win, and it’s beginning to not be that big of a surprise anymore.

Who is to say that WKU will not be in the same position at the end of the season as they were the last? And who is to say fans won’t be on social media begging for a bowl game on the committee’s Facebook and Twitter pages making promises that they will be there?

While there are many factors that go into being selected for a bowl game, WKU must do two things to sell themselves as being worthy: have their football team win more than six games and have their fans show up and fill the stadium. The team has gotten off to the right start, but the fans haven’t.

WKU football cannot do this all by themselves, and last year proved that winning games simply is not enough to be given a bowl game. The entire season is being watched.

If fans were as upset as they claimed to be at the end of last season, now is the time to show up and prove they will support their team.

Students get into home games at no cost. Put on one of the many free red T-shirts you’ve accumulated during your time on the Hill, grab your red towel, and stand up and cheer. With the way our football team is playing, you should get a good show.