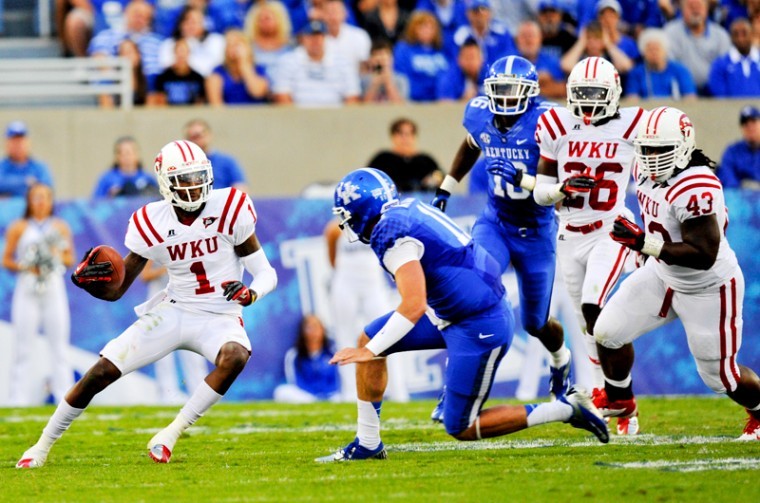 Sophomore defensive back Jonathan Dowling intercepts the football during the WKU vs. UK game at Commonwealth Stadium September 15, 2012. WKU won over UK in overtime 32-31.

Jonathan Dowling is an SEC player, and SEC players show up against SEC schools.

The sophomore free safety intercepted three of Maxwell Smith’s passes and racked up four tackles in WKU’s 32-31 win over Kentucky on Saturday.

The win was the Toppers’ first against UK, or any SEC opponent for that matter.

He played his freshman season in the SEC at Florida before transferring to WKU late in 2010. He made his Topper debut on Sept. 1 against Austin Peay after sitting out the 2011 season due to transfer rules.

SEC teams have won every national championship since 2006, and Dowling’s status as WKU’s lone SEC transfer makes him stand out from most of the other players on the WKU defense.

“When I play an SEC school or any other school, I feel like I’ve got to make a play,” Dowling said after the Kentucky win.

His stat line from the UK game ranks as one of the best at WKU in recent years.

Dowling is just the fifth player in school history to pull in three interceptions in a game and the Kentucky win.

His stat line from the UK game ranks as one of the best at WKU in recent years.

Dowling is just the fifth player in school history to pull in three interceptions in a game and the first to do so since Carl Brazley in 1978.

Dowling was named Sun Belt Conference Defensive Player of the Week on Monday for his efforts against UK.

“He did a great job this week of studying film and practicing, and it paid off in the game,” Taggart said.

He said having a “ball hawk” like Dowling on the WKU defense makes games difficult for opposing quarterbacks.

“He just has tremendous ball skills and a great understanding of the game,” Taggart said. “He trusts his instincts and that’s why he’s able to go and snag a lot of those balls — he doesn’t hesitate.”

Taggart said the win was a good way for his entire secondary, a group which calls themselves “the air force,” to come back after a weaker performance against Alabama.

The Topper defensive backs gave up 225 passing yards and four touchdowns through the air against the Crimson Tide.

“I told our guys, ‘here we go again, we’re in the spotlight, let’s thrive under pressure this time and show up,’ and a lot of guys did that in that game and it was good to see,” Taggart said.

Dowling figures to see plenty of action in the WKU secondary this Saturday against Southern Mississippi, as Golden Eagle quarterbacks are averaging 27 pass attempts per game.

He and his team-high four picks will likely be a focus of USM scouting reports.

Dowling said that while he doesn’t know if the Golden Eagles will build their offensive game plan around him, he’s planning on preparing for them as if they were any other opponent.

“I respect other players, but at the same time, I really wouldn’t change up what I do for someone else,” Dowling said. “I’m going to look at them as I do any other opponent and prepare for them as much as I can. That’s all I know how to do.”