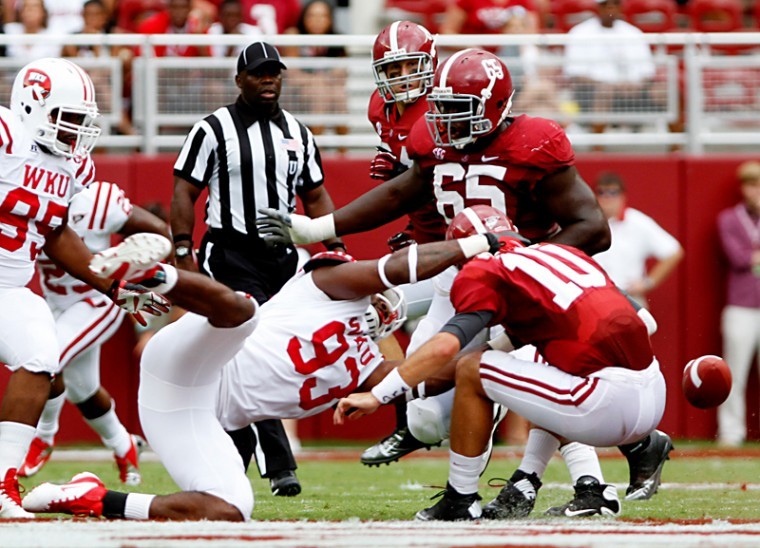 The Toppers might be coming home with a 35-0 ‘L,’ but the biggest letter of the day for WKU was ‘Q.’

Senior defensive end Quanterus Smith was the driving force of the Topper defensive line on Saturday.

The lineman, known as ‘Q’ by WKU players and coaches, recorded three sacks against Alabama’s quarterback A.J. McCarron and had an additional forced fumble, though it was recovered by the Crimson Tide.

Coach Willie Taggart said Smith was fired up all week about playing Alabama. He was suspended by the team in their opener against Austin Peay last weekend for a violation of team rules.

“Q was talking all week, he was excited about being back, and he wanted to go out and make them know his name,” Taggart said. “It was great for him to go out and do it against those big linemen they’ve got.”

Alabama boasts one of the top-ranked offensive lines in the country, with several former five-star recruits and current NFL prospects. Smith said he wasn’t intimidated by their reputation, though.

“You can’t worry about numbers and statistics and all that stuff,” he said. “You’ve got to go out and play your game and if they can stop it, congratulate them.”

Taggart said he thought Smith proved himself as an elite defensive end with his effort against the Crimson Tide.

The coach went on to praise the Topper defense as a whole. WKU held Alabama to a grand total of 328 yards.

“We feel like we’ve got a really good defense and nobody knows about it,” Taggart said. “I feel like our defense could be one of the top defenses in the country. We’ve got some players over there and they played that way. If the offense would have helped them I think it would have been a lot different.”

Toppers not shell-shocked by sellout crowd

Bryant-Denny Stadium in Tuscaloosa, Ala., can hold 101,821 people and every seat was taken at the start of the game on Saturday.

The stadium, one of the largest in the world, was filled to the brim for the Crimson Tide’s first home game of the season and the fans were vocal for the majority of the game.

Senior tight end Jack Doyle, who has played in front of similar-sized crowds in past seasons against Tennessee, Nebraska and LSU, said the veteran-led team wasn’t scared playing in front of so many hostile fans.

“Even early on in my career, you come the day before and see the stadium and then you’re just out there playing ball,” Doyle said. “You don’t even notice everyone out there.

Playing in front of so many loud and frenzied people can lead to communication issues on the field. Taggart said the crowd noise was not a factor in the loss, though.

“It’s just discipline,” he said. “It’s being disciplined and sitting in there and holding your own and not moving and our guys just didn’t do that there toward the end.”

As if playing the No. 1 team in the country wasn’t motivation enough, the Toppers brought someone into the locker room before Saturday’s game to inspire the team – Evander Holyfield, former heavyweight boxing champion.

Holyfield is the uncle of junior fullback Demetrius Coley and WKU’s plans for his part in the Toppers’ pregame routine were kept secret from the players and media.

Taggart said Holyfield, a heavyweight champ in the 1990’s who gained notoriety after then-champion Mike Tyson bit off pieces of both of his ears in a fight, talked with the Toppers about his upbringing and the struggles he went through.

“He just talked about never quitting, always believing, and we hadn’t lost a game,” the coach said. “He talked about the media – they make these guys out as better than they are and you’ve just got to play the game and until they beat you. You’ve got a chance.”

Taggart said he thought his team understood the message Holyfield was trying to get across.

“It was good for our guys,” he said. “He said a lot of things that I talked about with our guys about never quitting and giving it your all and that was good. It was a good message for our guys.”