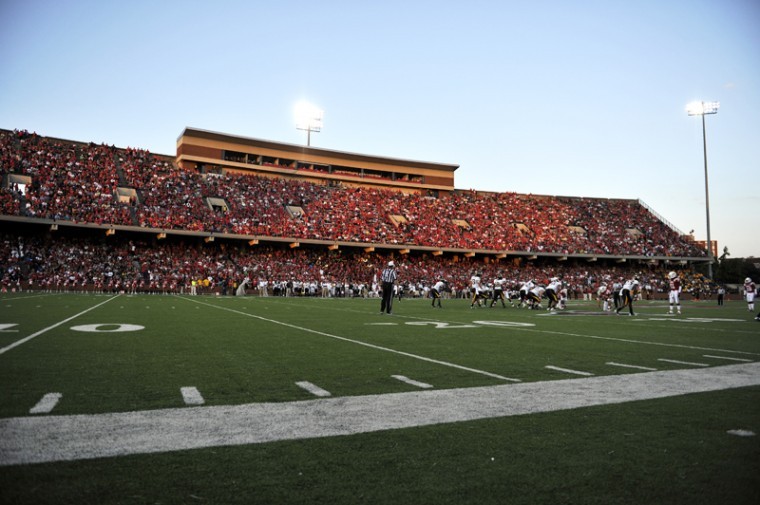 A record crowd watched the Toppers dispatch the Golden Eagles on Saturday.

23,252 people were in attendance at Smith Stadium on Saturday to watch WKU beat Southern Mississippi 42-17.

That’s the most to ever attend a game at Smith Stadium, surpassing the previous record crowd of 22,297, set in 2008 for a game against Murray State.

Coach Willie Taggart said those fans were a big part of the Topper effort.

“I really think the reason why we were so dominant is we had a Division I, big-time college football environment around here,” Taggart said after the game. “That atmosphere with those fans packing that building, I really felt like our guys drew strength from our fans.”

The coach said he could tell that all of the fan support helped to motivate his team.

Senior defensive end Jamarcus Allen has been at WKU since 2008 — he’s seen the stadium packed and nearly empty.

He said seeing Smith Stadium so full was a “good feeling.”

“It’s good to see the community come out and support us,” Allen said. “Not only because of the big win, but I feel like they see us as on the rise and we’re on our way to do big things this season so they’re going to be behind us even more now.”

Taggart also hope the fans stay behind WKU as well.

He said with WKU looking as good as it has this season, fans are running out of reasons to miss games.

“There’s no excuses for not coming back,” Taggart said. “If they like the way our football team looks, then I say show up every Saturday or Thursday or Tuesday night when we play — please be here and be loud.”

The Toppers had several scores from big plays on Saturday night, but the bread and butter of the offense was the run game.

Junior running back Antonio Andrews led the Toppers with 136 rushing yards on 15 attempts. Freshman Leon Allen was not far behind with 132 yards on 11 carries. Each had a touchdown.

They were joined in the backfield by junior fullback Kadeem Jones, who gained 42 yards on one carry late in the first half.

Even senior quarterback Kawaun Jakes was making plays on the ground. He had a big 16-yad rush in the first quarter when WKU was trying to establish its run game early.

Taggart said he was pleased with the way his team looked running the ball, especially Andrews and Allen.

“It’s big time whenever you can get two 100-yard rushers,” he said.

It was a good night for the rushing game to look good. Taggart said he got his rush-first philosophy from former coach Jack Harbaugh, who was in the stands on Saturday.

“Coach Harbaugh said that when he passes away, all he wants on his tombstone is the iso play,” Taggart said, referring to a play where the running back runs the ball up the middle of the field between the linemen. “He just wants the diagram on his tombstone, he doesn’t want anything else.

“I reminded our team that he loves that play and the first play of the game, we ran it. I would say we probably ran that play about 20 times tonight. I told our team, ‘we’re going to run coach Harbaugh’s play tonight,’ and sure enough those guys took pride in running it and they ran it well.”

Dowling’s status for next Saturday uncertain

The Sun Belt Conference has a rule that any player ejected from a game must serve a one-game suspension in the following game.

Under those rules Dowling would clearly be ineligible for WKU’s next game, on the road against Arkansas State next Saturday, but Taggart said it might not be such an open-and-shut case.

Taggart said he had a conversation with league commissioner Karl Benson, who was in attendance at Smith Stadium, that led him to believe the Toppers might have the safety in the backfield next weekend.

“I think it’s great for us to have the commissioner here at our game and he mentioned that he’ll be back next week,” Taggart said.

It was a night-and-day difference for WKU between this season’s non-conference schedule and last season.

The Toppers dropped their four non-conference games last season and started the year 0-4.

This year they’ve scored three wins over schools out of the Sun Belt on their way to a 3-1 start.

Taggart said he stressed to his team how important these non-conference wins will be if WKU finds itself hoping for an at-large bowl bid at the end of the year.

“We’ve still got to take care of our business at the end of the day, but you would hope that it’ll help,” he said. “We talked about it as a team, that’s something that as we grow as a football program, that’s something we had to do a better job at – out-of-conference games.”

The Toppers begin Sun Belt play in Jonesboro, Ark., next Saturday when they take on Arkansas State.

The Red Wolves are the defending conference champions and are the last team other than Alabama and LSU to beat WKU.

Taggart said he thinks his team can compete with anyone in the Sun Belt.

“I think we have ourselves a really good football team,” he said. “I keep telling our guys every week, we haven’t played our best ballgame yet but we’re getting closer.”

—For the 28th time in school history, WKU had two 100-yard rushers in a game (Antonio Andrews, 136 yards, and Leon Allen, 132 yards). It was the first time the Toppers had accomplished the feat since David Wolke ran for 178 yards and Tyrell Hayden for 117 against North Texas on Nov. 1, 2008.

—It was the second straight 100-yard rushing game for Andrews, who ran for 125 last week against Kentucky.