Stephens: Toppers not there, but they’re closer 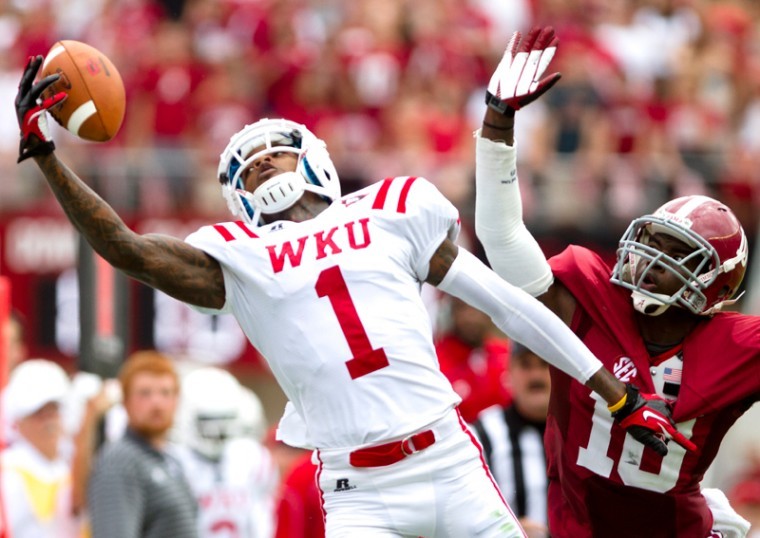 Western Kentucky Hilltoppers receiver Jonathan Dowling, covered by Alabama defensive back John Fulton, narrowly misses catching a pass from quarterback Kawaun Jakes during the game against Alabama. Crimson Tide lead 21-0 at the end of the first half at Bryant-Denny Stadium in Tuscaloosa, Alabama.

TUSCALOOSA, Ala. —WKU genuinely thought it could beat No. 1 Alabama on Saturday.

That was the talk earlier this week when coach Willie Taggart called the 40-point spread “baloney” or when defensive end T.J. Smith said his team was going to “freaking win this game.”

Don’t think for a second it was rah-rah B.S. They meant every word of it.

That’s why after Saturday’s 35-0 loss in Bryant-Denny Stadium, the Toppers weren’t talking about the things they did well and the steps they took as a program in a game that, for much of the way, was pretty even.

No, WKU’s men were instead lamenting an opportunity lost.

“I wanted to show everyone that we could play a lot better than we did against the No. 1 team in the country,” Taggart said. “But we didn’t, offensively.”

There’s no question that the difference in the game was turnovers.

The Toppers had four of them, resulting in 21 Alabama points. The Crimson Tide had zero.

It wasn’t just that WKU was turning it over, it’s that WKU was giving it away in parts of the field that put a lot of pressure on its defense.

Two of those giveaways resulted in quick-strike Alabama touchdowns. Add a second quarter Jakes fumble to that and the Toppers committed four turnovers.

You’re not going to beat the nation’s top team when you turn it over four times.

But looking beyond the turnovers and the points that resulted, Saturday’s game wasn’t the rout everyone expected.

The Toppers held the Crimson Tide, which ran roughshod over Michigan one week ago, to 39 rushing yards through three quarters.

As a team, the Toppers threw last year’s national championship-winning QB to the ground six times. (Which begs the question, why in Bear Bryant’s name did Alabama coach Nick Saban leave McCarron in deep into the fourth quarter?)

And, maybe most impressively, WKU played better in the second half than it did the first. Flash back to last year’s loss to No. 1 LSU, when the Tigers’ elite-level depth wore down the Toppers late and turned a close game into a rout.

That didn’t happen on Saturday.

If WKU fans want to take anything from Saturday’s loss, perhaps that should be it.

The Toppers have played these “guarantee” games for the better part of the last decade, all with about the same result.

WKU travels to a big stadium, takes a beating and heads back to Bowling Green six (or in this case, seven) figures richer.

Fans shrug their shoulders, give a “what can you do?” reaction, then get ready to move on to watch WKU take on some guys its own size.

But something was different on Saturday.

They weren’t completely over-matched by the big, bad bullies in Tuscaloosa.

I wrote earlier this week how a “bigger, faster, stronger” Crimson Tide would do in the Toppers.

But honestly, WKU players weren’t that much smaller, slower or weaker than their crimson-clad counterparts.

Instead it was evident that Taggart has brought in some men during his three years as coach, and made the men like Quanterus Smith that were here before he got here bigger, stronger, faster, better football players.

A 35-point loss is a 35-point loss, and Taggart and his men were right to treat it as one rather than celebrate their progress.

But if fans dig a little deeper beyond that score they’ll find some potential in what the Toppers did on Saturday.

They’ll find a team that hung in there against the nation’s best.

They’ll find a team that’s far better than it’s been in years.

And they’ll find a team that isn’t backing down to anyone.