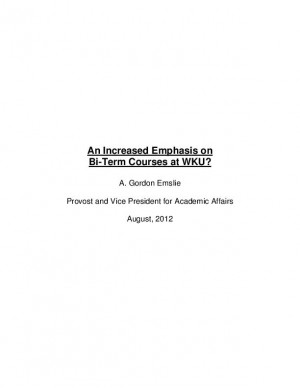 WKU is exploring the option of emphasizing more bi-term courses instead of full semester classes.

The proposal was made public at Friday’s faculty convocation, entitled “An Increased Emphasis on Bi-term Learning at WKU?”

Written by a small committee, the initiative was headed by Gordon Emslie, provost and vice president for Academic Affairs.

“This idea is very much a ‘work in progress,’” Emslie said in the proposal.

Emslie said the earliest draft of the bi-term idea involved a full transition to bi-term courses. The most recent proposal focuses on exploring bi-term classes.

Of the roughly 2,800 course offerings listed on the university website, 5 percent are bi-term classes, according to the proposal.

One of the biggest benefits touted in the proposal is the ability for students to easily graduate in three years instead of four.

“With this, you can take a full-time load with bi-terms plus a summer or winter course and graduate in three years,” President Gary Ransdell said of the plan.

Ransdell said these were “plans we have some degree of confidence in, but they’re not absolute.”

“I just don’t see this proposal being good for students,” Dodds said. “One of the pros the administration was trying to push off this schedule is that they would be more flexible, but I don’t see how that’s possible.”

Dodds said he’d be okay with seeing more general education classes offered as bi-terms, but believes not all full-semester courses could adequately be taught in seven weeks.

“The scary part of what they’re proposing is that this academic calendar change is paired directly with per-credit hour tuition billing,” Dodds said. “That is very detrimental. I think it could have far reaching consequences for recruiting students, for revenue, for almost everything.”

Currently, Dodds is planning a resolution in SGA that opposes the proposal, particularly the per-credit hour billing.