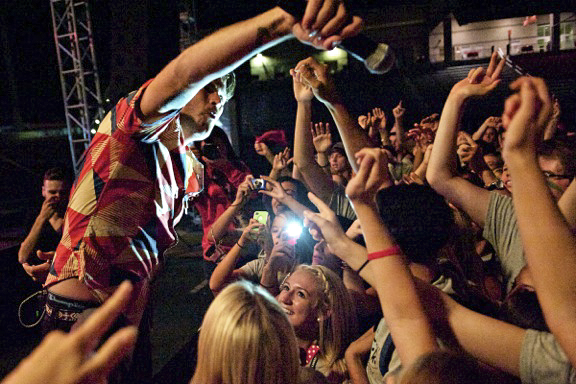 The beat of the music reverberated off Guthrie Bell Tower from Smith Stadium Sunday night as 3OH!3 played, helping kick off MASTER Plan.

For incoming freshman Elizabeth McCoy, 20, the concert was about participating in the college experience.

“I came just to have a good time,” the Harrodsburg native said. “To get to know the people around me.”

Although she didn’t know many of the songs, McCoy said the band was great.

For Heather Crump, 19, coming to the show was something to do.  She heard about the concert through MASTER Plan and wanted to come out to meet people.

“Just making the best out of life,” Crump, of Munfordville, said.

Crump had never heard the band before but she said she hoped they rocked it out.

“It’s a good way to start the week,” Crump said.

Katelyn Huff, 18, and Molly Ruth, 18, went to high school together in Leitchfield and came to the show to meet new people.

“I want to see what college will be like,” Huff said.

Ruth said she expected to have a good time.

A person that they had met that day was Mackenzie Howard, 18.  Howard, of Lexington, said she had never heard the band live before and was enjoying the show.

Huff, Ruth, and Howard were singing along with the songs and throwing glow sticks in the air with the rest of the crowd.

Big Red even participated at the concert by crowd surfing before the band started with their hit, “My First Kiss.”

The concert, presented by WKU Campus Activities Board, was free to all WKU students, faculty, and staff.