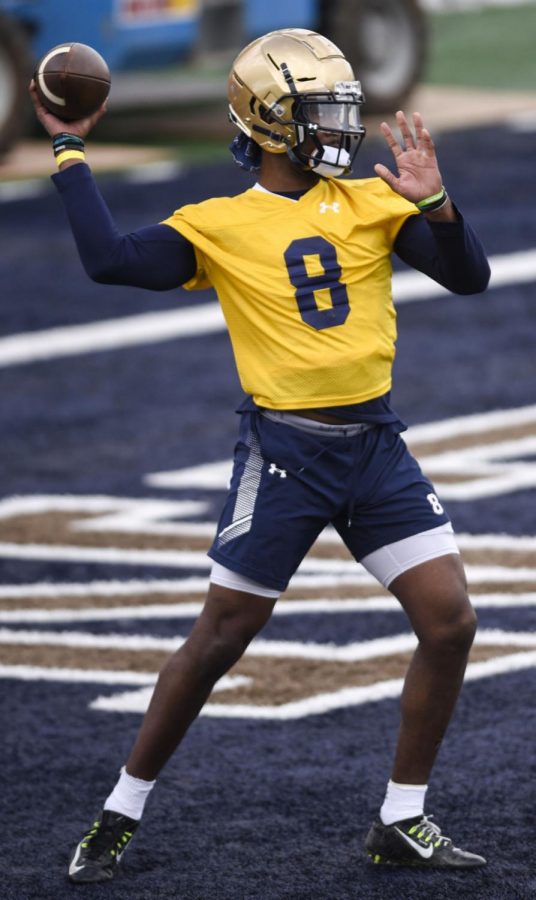 Montana State might be closer to choosing its next starting quarterback.

After the Bobcats’ second intrasquad closed scrimmage of the spring Saturday, MSU head coach Brent Vigen told the Chronicle that Matthew McKay has taken the lead in the team’s QB competition. McKay has received more first-team repetitions, including on Saturday. Though other passers have shown moments of potential, Vigen made clear McKay has stood out.

“I would see it trending that way,” Vigen said during a Zoom call.

On Saturday, McKay completed 9 of 11 passes for 117 yards and a touchdown. In the two scrimmages, he’s had no turnovers. He also ran eight times for 15 yards.

Vigen noted McKay’s athleticism has been impressive. McKay, a 6-foot-4, 208-pound junior, has yet to play a game for the Bobcats following his transfer from North Carolina State after the 2019 season. In his final year there, he was 86 of 150 for 910 yards, three touchdowns and an interception in six games.

In last week’s scrimmage, McKay completed 10 of his 14 passes for 132 yards and a 34-yard touchdown. McKay added eight rushes for 30 yards.

“He’s developing as a passer,” Vigen said. “He’s thrown the ball well. Now it’s putting everything together. It’s timing, seeing the defense. That’s where he needs reps in the passing game. I think he’s a capable passer, but he needs to keep growing there.”

During a fall scrimmage, McKay showcased his mobility and accuracy while on the move. With about two minutes left, he methodically led a drive down near the opposing goal line. A fourth-down pass was deflected and intercepted as time expired.

McKay could set himself apart because of his speed and poise.

“I think (McKay’s) athleticism is apparent,” Vigen said. “I do think at that position that is a critical element, whether that is running the football by design or the ability to evade the rush and make plays with your feet, extend plays. I think that’s apparent that he has that. I don’t think it’s a surprise to anyone.”

In order for McKay to improve, Vigen noted he must remain in the pocket more often. That means even if his primary receiver isn’t open and finding another target before trying to scramble.

“Part of this growth is getting reps,” Vigen said. “It’s not like he’s some seasoned vet that has all this experience and all the answers by any means.”

Tucker Rovig, who took over as the starter midseason in 2019 and led the Bobcats to the FCS semifinals, was 6 of 9 for 70 yards and threw an interception on a deflected pass Saturday. Casey Bauman, MSU’s Day 1 starter in 2019, was 3 for 5 for 64 yards.

Following the Sonny Holland Classic on April 24, Vigen expects to release a depth chart. He believes it will be motivating. It will communicate to players exactly where they stand. He also wants to point out to players how they can improve their skills so they can either climb that depth chart or remain at the top.

That means the depth chart won’t be final until the season opener in September.

“It’s a moving target,” Vigen said. “Everything is in pencil.”

After a strong rushing performance last weekend, the Bobcats ran for 224 yards on 44 carries on Saturday.

Isaiah Ifanse led the way again with 51 yards on six rushes. However, Vigen highlighted others who stood out.

He called Elijah Elliott’s skillset “exciting” after he ran four times for 34 yards, showing what he can do around the perimeter. DeMareus Hosey (seven carries, 38 yards) and Jaharie Martin (two carries, 35 yards) also shined.

“All of them are a bit different, and that’s typically what you hope to get in that room,” Vigen said. “Who’s going to have a more specific role and who’s going to be more complete? I think that’s the ongoing question I’m certain will go into the fall.”

The head coach added the Bobcats’ defensive line, though missing multiple players with short-term injuries so some are temporarily out of position, illustrated improvement. The Bobcats totaled five sacks for the day.

“It was a more balanced scrimmage today,” Vigen said, “which is what you want.”