Lady Toppers kick off season with win over Evansville 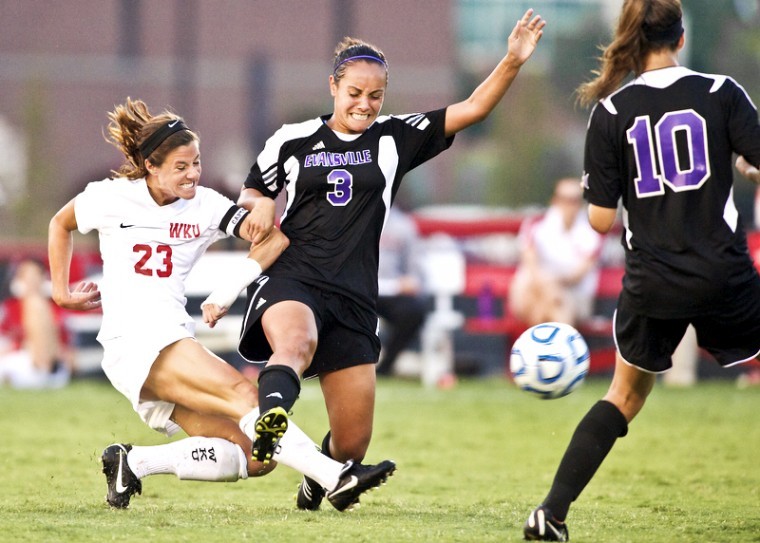 WKU got the ball rolling on its season Friday night with a 3-0 win over Evansville at the WKU Soccer Complex.

“I’m very pleased with how the girls came out and played,” coach Jason Neidell said. “For a first game, we had great control of the midfield.”

One of the highlights was senior midfielder Courtney Rymer’s performance, Neidell said.

Buechel scored a second goal at the beginning of the second half when she dribbled around the defense up the left side of the field and tapped the ball into the net.

“I went from scoring like two goals my first year, so it’s exciting to score two in the first game,” Buechel said.

WKU scored its third goal with 20 minutes left in the game when sophomore forward Nicholette Sartori took a shot from the edge of the 18 box. The goalie came out and the ball soared into the net.

Neidell said the Lady Toppers worked in practice on mistakes from their two exhibitions during the preseason.

“We’ve shown improvement every time we’ve stepped on to the field, and that’s what we want,” Neidell said.

Aside from improving as a team, the Lady Toppers have another goal, Buechel said.

“I want to win a Sun Belt Championship,” she said. “It’s our goal as a team, and it’s something we haven’t done yet. I want to do it before I leave here.”

WKU will face off against Tennessee at 1 p.m. Sunday at the WKU Soccer Complex.